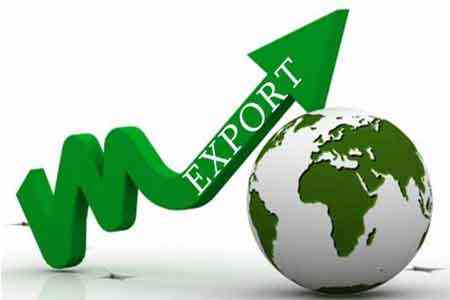 ArmInfo. Armenia increased export deliveries 2.2-fold In October. Armenian Minister of Economy Vahan Kerobyan announced this during a briefing. "This suggests that,  despite numerous problems, great opportunities have opened up for  Armenian producers," he stressed.

The minister explained that with the exit of many foreign companies  from the Russian market, the resulting vacuum is successfully filled,  including by Armenian manufacturers.  At the same time, he said that  in the coming days, the Ministry of Economy will hold a meeting with  the export community of Armenia to discuss the existing problems and  opportunities.

Speaking about the problems, he recalled that after the explosion on  the Crimean bridge, the mechanisms for checking Armenian cargo from  the Russian side were tightened, which affects the throughput at the  Upper Lars checkpoint. Among the queue formed, according to him,  there are manufacturers of perishable products that suffer losses. In  this regard, Kerobyan said that daily negotiations are being held  with Russian partners in order to speed up the throughput at the  checkpoint. He also reported on a conversation that had taken place  the day before with the Minister of Economic Development of the  Russian Federation Maxim Reshetnikov, with whom mechanisms for  resolving the situation were discussed.

It should be noted that according to the Statistical Committee, the  foreign trade turnover between Armenia and Russia exceeded $3.2  billion in January-September 2022, with a sharp acceleration in y-o-y  growth from 13.5% to 80.5%, mainly due to increased exports.  In  particular, the volume of exports of goods from Armenia to Russia  significantly accelerated the y-o-y growth from 27.4% to 2.4-fold,  which, with a slightly less restrained upward pace, was also observed  in terms of the volumes of import of goods from Russia to Armenia,  from 7.6% to 52.3%, with the provision of volumes of 1.4 billion  dollars and 1.8 billion dollars, respectively.  As a result, Russia's  share in Armenia's foreign trade turnover increased from 31% to 34.5%  year-on-year, with a noticeable increase in the share in exports from  27.7% to 40%, accompanied by a slight decrease in the share in  imports from 33% to 31.1%.