Vice-President of Interstate Bank: After the developments at the  beginning of 2022, the turnover in the national currencies in the  correspondent banks of the Interstate Bank has increased  significantly 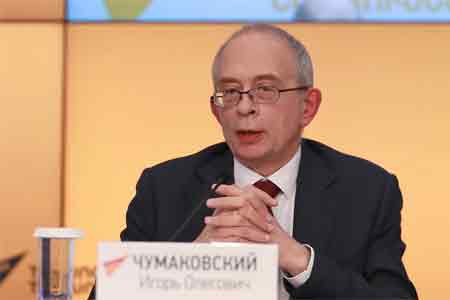 ArmInfo.After the developments at the beginning of 2022 (the Russian-Ukrainian military conflict - ed. note), the turnover in national currencies in the  correspondent banks of the Interstate Bank has increased  significantly. Igor Chumakovskiy, Vice-President of the Interstate  Bank, said this in response to a question from ArmInfo during a press  conference on November 17 at the press center of the Sputnik agency.  At the same time, he mentioned that the position of the Russian ruble  in settlements is, of course, leading.

However, as Chumakovskiy emphasized, in order to increase the share  of national currencies in the economic life of economic entities, it  is necessary to develop both a system for stimulating these  settlements, which is still a rather difficult task requiring  decisions at the state level, and to form organized financial markets  operating in national currencies.

In this regard, he emphasized that the changing external environment  will push EAEU countries to settle in national currencies, and  government actions will also be directed in this direction.  "But it  will be a long process. It is extremely difficult to abandon the  dollar even in 10 years," the Vice-President of the Interstate Bank  said.

Earlier, Assistant to the Chairman of the Board of the Eurasian  Economic Commission (EEC) Iya Malkina said that in 2021 the share of  payments in national currencies in mutual settlements of the EAEU  countries amounted to 73.5%. According to expert estimates, this year  it may reach 80%.