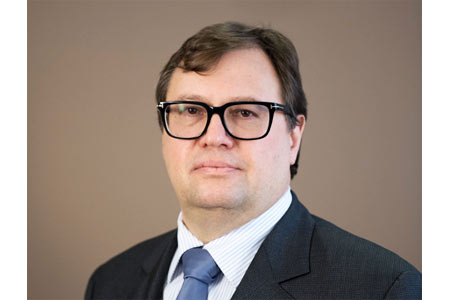 ArmInfo.“The subvention policy initiated by the Armenian government is one of the best formats for interaction between the state, local governments and businesses.”

Roman Khudoliy, President of the GeoProMining Group of Companies

The financial participation of the GeoProMining Group of Companies in subvention projects in Armenia within the framework of cooperation with the government and local governments reaches 1 billion 700 million drams. The projects have been implemented in the Syunik, Gegharkunik and Ararat regions of the country, where GeoProMining assets are located.

State subvention programs were initiated by the Armenian government in order to involve all interested parties in the implementation of infrastructure projects, aimed at regional development. In particular, all projects are financed from three sources: the state budget, community budgets and private sector grants. The implementation of projects effectively affects the development of community infrastructure.

Within the framework of subvention programs of the Zangezur Copper-Molybdenum Combine in the communities of Kapan and Kajaran, the following projects were implemented:

• Repair of roofs and basements, intended for shelters, in multi-apartment residential buildings

• Capital repairs of internal lanes and yards, asphalting of streets and sidewalks

• Purchase of equipment for maintenance of public utilities

• Repair of roofs and entrances of apartment buildings

• Reconstruction and asphalting of roads

• Reconstruction of the House of Culture, and landscaping of the adjacent park

Roman Khudoly, President of the GeoProMining Group of Companies: “The subvention policy initiated by the Armenian government is one of the best formats for interaction between the state, local governments and businesses”.

“GeoProMining, as a socially responsible company, gives great importance to the implementation of strategically significant projects aimed at improving the socio-economic standard of living in the regions of its presence. Social objectives in the communities, where we operate, are constantly in the focus of the Company's attention.

Therefore, when the Armenian government proposed the idea of subvention programs, partially coinciding with  our social assistance policy, GeoProMining became involved in active participation. Taking into account the considerable experience of cooperation within the framework of these programs, I would like to note their high efficiency and targeting. The company is ready to further contribute to regional development and improve the living standards of their citizens.”