Satlantis CEO: Armenia did not buy an expensive Mercedes, but rather   established a plant that will produce it 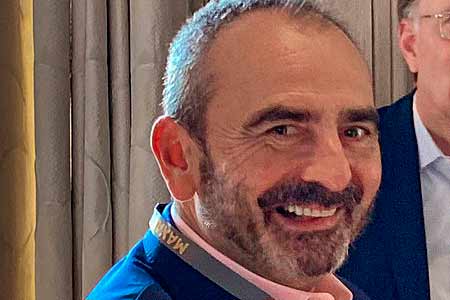 ArmInfo.The Spanish Satlantis company opened a representative office in Armenia, because Armenia has the ability to fully control the satellite on its own.   Satlantis CEO Tomas Hernani, announced this during a press conference  on November 18. In this regard, he stressed the importance of a  strategic vision.

< If we make a comparison, Armenia did not buy an expensive Mercedes,  but established a plant that will produce it.  Therefore, we have  opened our representative office here, and we are planning to  implement long-term programs>, Hernani  said.

Javier Ojanguren, Armenian Program Manager of SATLANTIS, said that  out of 15 possible operations in Armenia, it will be possible to  carry out 7-10 operations daily, it will take 18 minutes to collect  data throughout Armenia, and 22 minutes to receive it at the station.

He explained that thanks to telemetry and 7 subsystems of the  satellite, it will be possible to obtain the following data:  temperature indicators, capacity consumption, voltage of electrical  flows, the process of executing program tasks, etc. In addition,  there will be a response system that notifies of any failures. The  representative of Satlantis also noted that the data received from  the satellite could be used in various areas.

In turn, Minister of High-Technology Industry Robert Khachatryan said  that work on testing the satellite had been carried out for six  months, which had been successfully completed. In this regard, he  stated that the satellite is fully operational. <There are no  restrictions on the use of data in the context of industries.  This  is an unlimited area where you can implement innovative ideas>, he  said.

Deputy head of the department Avet Poghosyan added that satellite  data can be used in the field of agriculture, including for obtaining  data on crop maturation; in cadastral cartography; water resources  management; prevention of natural disasters or liquidation of their  consequences; to forecast economic growth; border monitoring for  security, etc. In this vein, he noted that the Armenian satellite  made it possible to obtain images on the border of Armenia as of  September 14 (on September 13, the Azerbaijani Armed Forces carried  out a military attack on the sovereign territory of Armenia, ed.  note). < the rocket- comic industry  is the fastest growing industry  with an annual turnover of about $300 billion, and it is forecasted  that in 2030 the annual turnover will reach $1 trillion. Our goal is  for Armenia to take its place in this market in 2030>, Poghosyan  said.