Expert: There are a lot of random people in the tourism sector of  Armenia today 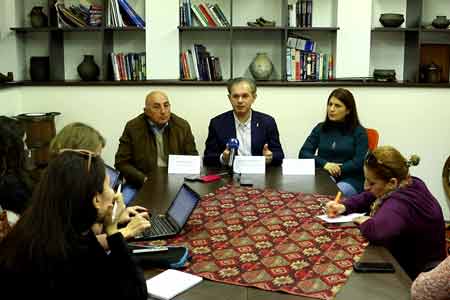 ArmInfo.he Armenian Association of Professional Tourist Guides (AAPTG) came up with a proposal to develop a law in the tourism industry that would provide  for the licensing of guides wishing to work in Armenia. This proposal  was voiced during a press conference on November 29 by an expert in  the field of tourism, writer, journalist Ruben Pashinyan.

"There is no need to invent anything, there is no need to reinvent  the wheel, there are proven systems all over the world," the expert  emphasized, noting that it is necessary to put a coordinate system in  the form of a law that will regulate this activity. At the same time,  Pashinyan noted that licensing should not be carried out by a state  body, and a public organization, such as the Armenian Association of  Professional Tourist Guides or the Armenian Guides Guild , can act as  such a body.  Ruben Pashinyan stressed that such organizations can  also take on the responsibility of transferring their knowledge,  skills, data, and then carry out selection and licensing. "As it is  done in all normal countries," he said.

The expert noted that there are a large number of random people today  in the tourism sector of Armenia, who appeared not only in connection  with the relocation of citizens from the Russian Federation and Iran.   Pashinyan explained that today, figuratively speaking, after an hour  and a half of their stay in Armenia, many people believe that they  can work as guides, or even train guides. "We see completely random  people who pass on random information to the guests, who in turn get  an untrue image of Armenia."

However, the dissatisfaction of Russian-speaking Armenian tour guides  in this regard is increasing.  According to Pashinyan, they are left  without work, their Russian colleagues who moved to Armenia are  actively working instead. "There is a similar problem in other areas,  and the snowball will grow. Therefore, if it is possible to prevent  this strife, it is necessary to bring this area into a normal legal  course. For the sake of the country's peace and well-being, the issue  must be resolved once and for all," he stressed.

In turn, Zaruhi Orbelyan, vice-president of AAPTG said that this  proposal is already being discussed with the Armenian Tourism  Committee, and joint work is being carried out. "This is not a new  topic, we have long raised the issue of including the relevant  paragraph in the new law on tourism. It's just our concern and our  demand to be able to apply these regulations, and for this we need  assistance in the field of control," she said.

At the same time, the guide noticed that the proposed proposal does  not aim to deprive the immigrants of work, but only requires  regulatory mechanisms.

Orbelyan also stressed that the Tourism Committee is a body that has  no leverage. "They established a body, but did not give any authority  for this body to work," said the vice-president of the Association.   In this regard, she noted that tourism in Armenia is not just  leisure, business, but a strategic industry that needs to be treated  accordingly.  At the same time, Orbelyan noted that, in general, the  tourism sector of Armenia needs the so-called filtering mechanisms,  mentioning travel agencies in this context.

Honorary member of the AAPTG, journalist Ashot Levonyan stressed that  a guide, regardless of nationality, shouldstill be a bearer of  Armenian culture. According to him, for such work, it will not be  possible to confine oneself to book knowledge in the field of the  history of Armenia. "You can learn the year of the founding of a  church, the years of the reign of this or that king, but  communication with guests always covers a wider range of issues.   Sometimes we have to talk about Armenian identity, politics and  economics, our guests are interested in many questions. When  communicating, the guide should be able to correctly represent the  country and the people living in it with their aspirations, sometimes  illusions: And this is a big responsibility>, he stressed.

It should be noted that the issue of licensing guides in Armenia has  been under consideration for more than ten years. The tourism  infrastructure is not keeping pace with the development of the  tourist flow, which significantly limits the possibility of its  modernization in accordance with international standards.