Vahan Kerobyan: Our goal is to bring the volume of investments to 25%  of GDP 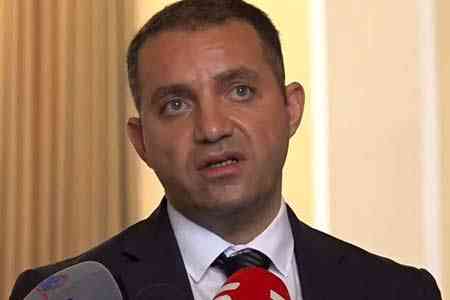 ArmInfo.Gross savings (investments) of Armenia by July 2022 rose by 51%. Armenian Minister of Economy Vahan Kerobyan stated this in a conversation with  journalists on the sidelines of an event dedicated to the 15th  anniversary of the Investment Council of Armenia (ICA) in Armenia.

Speaking about cooperation with ICA, Kerobyan highly appreciated the  interaction, noting its effectiveness. In this regard, the minister  noted that, together with the Council, a number of programs are being  implemented that facilitate business activities. In this context, he  said that by joint efforts last year it was possible to change the  procedure for providing bank guarantees in the public procurement  process.  "This, in our opinion, had a great economic effect -  hundreds of billions of drams immediately entered the market," he  stressed.

At the same time, Kerobyan noted the important role of the ICA in the  work of the SME Council. He stressed that during the discussions,  several projects are approved that have a positive impact on the  environment created for SMEs in Armenia.

It should be noted that the Investment Council of Armenia was  established in 2007 within the framework of cooperation between the  Government of Armenia and the European Bank for Reconstruction and  Development (EBRD) in order to create an institutional platform for  dialogue between the private and public sectors to address the  problems of the business and investment environment, and implement  reforms.

During the period of its activity, the Council managed to implement  more than 25 reforms in the tax, customs, in the field of inspection  bodies, in the issue of facilitating entry into export markets, food  imports, leasing, modernization of the economy, in the field of  public procurement, etc.

According to the Statistical Committee, the real sector of the  Armenian economy received $1.6 billion in total foreign investment in  the first half of the year (all types and forms of investment, ed.  note), with a slowdown in y-o-y growth from 35% to 23%. At the same  time, the volume of foreign direct investment (FDI), on the contrary,  accelerated in growth from 50% to 68%, reaching $623 million or 40%  of the total volume of foreign investment. It should be noted that  the RA Statistical Committee publishes data on foreign investments  once a quarter, indicating them in AMD equivalent and in the form of  gross flow - accumulated volume (without repayments) from 1988 to the  reporting date, in this case, to June 30, 2022.  To prepare this  material, ArmInfo specialists calculated the volumes of the reporting  period themselves, taking as a basis the statistical data of the  gross flow in the corresponding periods of 2022 and 2021 (H1).  (The  settlement rate of the dram as of June 30, 2022 was 407.21 AMD/$1).  Such statistics do not give real figures on investment income for a  specific period of time, however, they show the general dynamics and  trend. In 2021, the volume of total foreign investment (all types and  forms of investment - ed. note) in the real sector of the Armenian  economy increased by 54% (against a 39% decline in 2020), reaching $  2.8 billion. The share of FDI in total foreign investment in 2021  accounted for 29% (against 26% in 2020) or $798 million, which is 71%  higher than in 2020 (against a 21% decline in 2020).