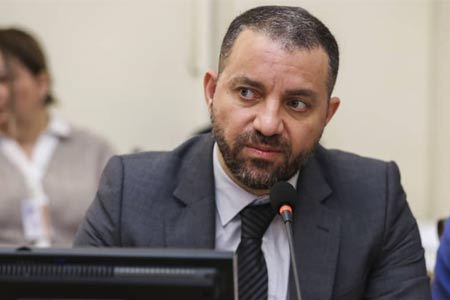 ArmInfo. The Ministry of Economy will provide "oxygen" for IT companies working with the international market. RA Minister of Economy Vahan Kerobyan said this  on the sidelines of the event dedicated to the 15th anniversary of  the Investment Council of Armenia (ICA) in Armenia, answering a  question from an ArmInfo correspondent.

He noted that due to the revaluation of the dram, IT companies suffered greatly, a significant  share of income of which comes from exports."We offered to give the  companies oxygen so that they have time to rebuild," the minister  said.

Kerobyan explained that the support will be provided in the form of  subsidies. <Our proposal is the following - to return to companies  paid income tax in the period from September to December. We are  doing everything possible to make this decision by the end of the  week>, the head of the department emphasized.

In this regard, he reminded that 5 of the 18 goals of Armenia's  <2050> strategy refer to the IT sector. "This is a strategic  direction for us, and we must help ensure that the created  environment is useful for IT sector, and does not work against them,"  he concluded.

It should be noted that yesterday, Minister of Economy of Armenia  Vahan Kerobyan, in an interview with the Public Television, announced  a program aimed at overcoming the difficulties associated with  revaluation the dram for IT companies operating in Armenia.

The unprecedented western sanctions imposed on Russia account for the  highly volatile market since this March 2022.  Since the same period,  there has been an influx of a large number of Russian citizens into  Armenia, who, upon arrival, also moved their capital, which in turn  significantly increased the volume of transfers from Russia, and  this, coupled with the increase in the dollar supply, has become one  of the main reasons for the depreciation of the dollar in the foreign  exchange market of Armenia.  In addition to this, the citizens of  Armenia, fearing an even greater depreciation of the American  currency, hastily exchange their dollars, thus depreciating them even  more.  As a result, in the retail foreign exchange market of Armenia,  the dram depreciated against the dollar from February 23 to March 10  of this year by 10% - up to 522 AMD/$1 on average, after that it  began to strengthen rapidly - by September 12 inclusive, by 22% in  total - up to 410 AMD/$1, but starting from September 13, under the  influence of the military- political factor(at 00:05, the Azerbaijani  Armed Forces began intensive shelling of Armenian positions from  artillery and large-caliber guns in the direction of Gegharkunik,  Vayots Dzor and Syunik regions using UAVs, but by the evening of  September 14, an agreement was reached on ceasefire), it began to  devalue again , reaching 424.5 AMD/$1. However, in the later  developing devaluation environment, the dram returned to the previous  level of 410 drams/dollar including September 29, but the resumption  of devaluation on September 30 brought the dram down again to the  level of 413 drams/dollar.  But the new flow of immigrant coming to  Armenia, who were leaving the Russian Federation due to the  announcement of mobilization, again restarted the depreciation of the  dram against the US dollar until September 30 to 413 drams/$1..

This did not last long, because in early October the dram again began  to revalue This did not last long, as the dram began to strengthen  again in early October, returning on October 7 to the level of 410  AMD/$1 fixed on September 12, remaining at this level until October  15, after which the revaluation continued to 400 AMD/$1 by October  28. The dram remained at this level until the end of the first ten  days of November, but then the revaluation continued to 398 drams/$1  by November 21.  In total, from February 24 to March 10 of the  current year, the dram devalued against the US dollar by 10%, after  which a revaluation was outlined, as a result of which the dram  appreciated by 23%, and for the entire period under review (from  February 24 to November 21 this year) the dram appreciated against  the US dollar by 18%.