"Demand for specialists in ICT" round table was held in Russian Economy University after Plekhanov, Yerevan Branch 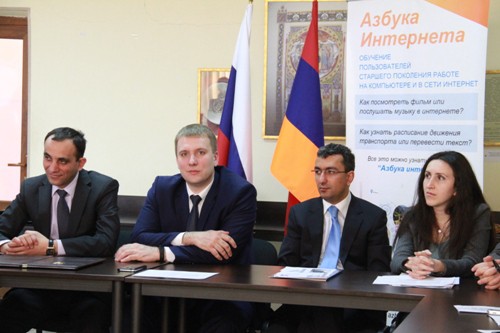 ArmInfo. A round table on the topic of demand for specialists in information and communication technologies was held today at the Yerevan Branch of Russian Economic University after Plekhanov. Rostelecom (Armenia) and Russian Center for Science and Culture in Yerevan participated in the event.

During the event CEO of Rostelecom (Armenia) Hayk Faramazyan presented the company's experience of work with the higher educational institutions and students of Armenia as well as joint programs implemented with the HEIs of the country. Experience of teaching IT in the university within CISCO Academy (established with the assistance of the Russian Embassy in Armenia) was also presented.

"Innovations are developing and being modernized quite rapidly both globally and in Armenia.  The matter also concerns human resources.  Development of infrastructures and introduction of advanced technologies - this is how we see our future. To achieve this goal, we need highly- skilled specialists who are fond of their job. I am sure the students of the Yerevan Branch of the Russian Economic University after Plekhanov have all opportunities to achieve this goal," he said.

Under the first stage of the ABC on Internet program, Rostelecom awarded gifts to the volunteer students who became "teachers" for the older generation representatives throughout the period of the project.

To note, OJSC Rostelecom (www.rostelecom.ru) is one of the biggest national telecommunications companies in Russia and Europe, with a presence in every segment of the telecommunications services market and coverage of more than 34 million households in Russia.  The Company holds a leading position on the Russian broadband and pay TV markets, with over 11 million fixed-line broadband subscribers and more than 7.8 million pay TV customers. Starting from December 18, 2012 GNC-ALFA CJSC provides telecommunication services in RA under the brand of "Rostelecom" as a subsidiary company.  To recall, Plekhanov Russian University of Economics (PRUE) is one of the ;largest economic universities in Russia. It consistently ranked as one of Top 5 Russian Business Schools, Top 10 Moscow Universities and is also included in the 2014 ranking of Top 100 BRICS Universities (per 2014 QS World University Rankings).