On June 15 Yerevan-Batumi-Yerevan "Armenia" train departed for the first time this year: ticket prices reduced by up to 20% 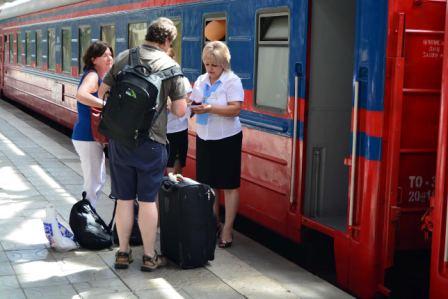 The press office of the company has told ArmInfo that 65 passengers left for Black Sea resorts of Georgia by the first train. As of today 790 tickets have been sold on this route.

"Armenia" train will run every day till October 1 starting from Yerevan at 3:30pm.  The tickets are available at the railway stations of Yerevan, Vanadzor, Gyumri and Armavir, as well as at www.ukzhd.am.  The travel time from Yerevan to Batumi is 15 hours 40 minutes; the return time is 15 hours 50 minutes.

Gagik Movsisyan, Head of Passenger Transportation Department of South Caucasus Railway has informed that the cars of the "Armenia" train completely meet the technical, sanitary-hygienic norms and safety standards. The sleeping cars are provided with free Wi- Fi.  According to the statistical data of the SCR, as compared to 2008, passenger operations in 2015 grew by 395% from 8.6 thsd to 34 thsd people.

To note, SCR CJSC is a 100% subsidiary of the Russian Railway OJSC and the concessional manager of Armenian Railway under the 13 Feb 2008 agreement, which was signed for 30 years and may be prolonged for 10 more years.