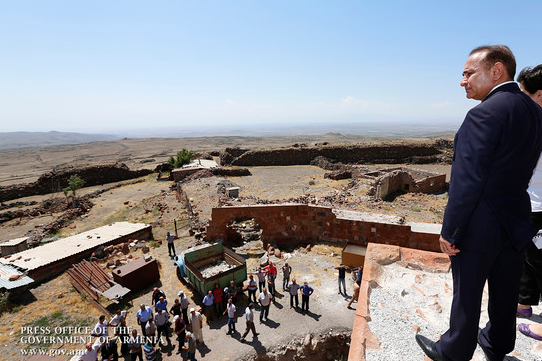 ArmInfo. "Spanish construction company has become a real evil for the North-South road corridor", Armenian Prime Minister Hovik Abrahamyan told first Deputy Minister
of Transport and Communications Arthur Arakelyan at the government's session today, when commenting on the issue of "delay of construction work on Ashtarak-Talin section within the North-South project".

The Deputy Minister replied that as of today all the construction activities are underway according to the approved schedule. "We have not received any alarms on delay of construction", Arakelyan noted. "So my note is not an alarm for you? I am telling you this for the second time. What is the matter? Have you studied this issue?" The Prime Minister questioned. According to him rumors are circulated that the construction is delayed because of the financial problems of the Spanish company. He has also stressed that there are problems also with the Ararat section of the road, which quality does not meet the standards".  There are certain problems with this company, according to the rumors the funds were misappropriated, please check
into the matter", Abrahamyan instructed.

After the session Deputy Minister of Transport and Communications Artur Arakelyan told journalists that Spanish company Corsan Corviam has been fined already for non-proper quality of the construction work.  Based on the results of the inspection certain divergences were registered, which were envisaged by the agreement. As a result the company was fined at 6 mln USD from the total 70 mln USD to be paid to it for the claims related to the quality of the conducted work within Tranche 1 from Yerevan to Artashat and Ashtarak. "However, there are no reasons to dissolve the agreement with the company", the Deputy Minister stated.

The Prime Minister has twice visited Ashtarak-Talin section, where the construction activities are being held within Tranche 2. He was not satisfied with the progress of work, Arakelyan informed. He explained that delays are mainly caused by agreements with subcontractors.

Answering to the question how much Armenia has already paid to the Asian Development Bank, the lender of the construction, for delay in using the loan funds, Arakelyan answered that this is not envisaged by the agreement.

To note construction of Ashtarak-Talin section is a part of the North-South road corridor project. North- South 556km motorway will be laid via the Armenian towns of Meghri-Kapan-Goris-Yerevan- Ashtarak- Gyumri-Bavra and enter the territory of Georgia on Akhaltsikhe-Batumi section, which will settle some transport problems
of Armenia.  This will be a four-lane motorway of reinforced concrete extending from the Armenian border and Iran to the Georgian port Batumi. The road corridor will facilitate improving the road connection with the two neighbors of Armenia: Iran and Georgia, providing access to international trade routes and markets.  Armenia raised $500mln loan from the Asian Development Bank for the project that is estimated at $1 billion. Eurasian Development Bank is ready to provide $150 million. Armenia raised $60 million from the European investment Bank.  Due to the project, the overland communication Europe-Caucasus-Asia will be improved. The project will be completed by 2019. It will allow Armenia to soften the consequences of the
blockade by Azerbaijan and Turkey and to join the Black Sea ring highway. Corsan Corvian Spanish company has won the tenders for construction of the first sections of the road, Chinese Sinohydro Corporation has won the tender for construction of the Lanjik-Gyumri section in north of Armenia.