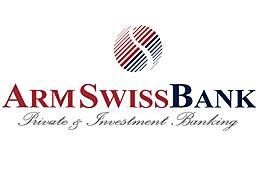 ArmInfo. At the moment the total regulatory capital of ArmSwissBank is nearly 33 bln AMD versus 30.4 bln AMD as of late March and 19 bln AMD as of early 2016. The press office of the Bank has told ArmInfo that the capital has increased due to 8 bln AMD direct investments by the shareholders in March 2016. The capital replenishment was dictated by the need to comply with the Armenian Central Bank's new standard for total capital of the banks - at least 30 bln AMD versus the current 5 bln AMD.

"HVS Holding" LLC managed by Vartan Sirmakes and registered in Luxembourg has been the holder of 80% of ArmSwissBank's shares since 10 March 2016, and the remaining 20% has been owned by "BELEGINGSMACHEPIJ JONGO" LLC since late 2013 (the company is managed by Vartan Sirmakes and registered in the Netherlands). So, after these changes, Vartan Sirmakes - a Swiss businessman, the founder and the owner of the world famous Franck Muller Watchland (Switzerland) - remains the indirect holder of ArmSwissBank's shares

To recall, ArmSwissBank CJSC was founded on 7 October 2004 by Mr Vartan Sirmakes, the founder, owner and CEO of the famous Franck Muller Watchland watch manufacturer, which has a representation in Armenia. ArmSwissBank holds leading positions in the Armenian banking market in terms of securities issue, marketmaker and custody services. It is an active participant on the primary and secondary securities markets. Since 2006, the Bank has been the Government's agent on the primary market of government bonds. In 2014, the Bank conducted 63% of the issues on the primary market. Since 2013 the Bank has been an account operator and member of the settlement system of the regulated market.

According to the Financial Rating of Armenian Banks by the Agency of Rating Marketing Information (ArmInfo), as of 1 July 2016, the total capital of ArmSwissBank was 22.7 bln AMD (27.8% year-over-year growth), authorized capital - 10.1 bln AMD (no changes over the past year), accumulated profit - 9.9 bln AMD (37.7% year-over-year growth). In H1 2016, ArmSwissBank doubled its net profit to 1.7 bln AMD versus H1 2015, holding the 4th position among the TOP 5. In the Bank's assets, lending makes up 47.2% (with the major part of it being lending to economy sectors - mostly SME, industry and agriculture), investments in securities make up 36.7% (mostly government bonds). The Bank holds leading positions in terms of investment in securities. As of 1 July 2016, only 7 banks' total capital exceeds the CBA's new standard to be effective starting 2017 (30 bln AMD).

To note, Vartan Sirmakes implements a number of large investment and charitable projects in both Armenia and Nagorno-Karabakh. He is also known to be one of the most important investors in the economy of Belarus. In the early 2000s, the investor purchased a significant share and made tangible investment in the Minsk Watch Factory (Luch trademark). He is also the ultimate beneficiary owner of BSB Bank (former BelSwissBank).