On September 27, Armenian Prime Minister Karen Karapetyan chaired a consultative meeting, attended by banking sector representatives, the press office of the Armenian Government reports The Prime Minister stressed the importance of the meeting and not 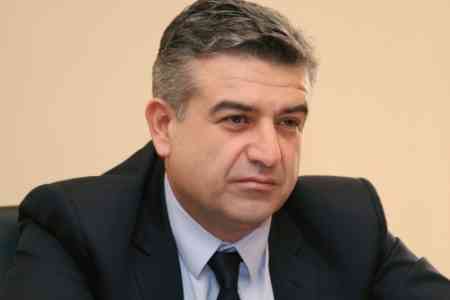 The Prime Minister stressed the importance of the meeting and noted  that he is expecting proposals containing practical and innovative  solutions that would accelerate the improvement of the business  environment and would attract investment.

"Our goal is to come aware of the existing problems and challenges in  order to understand what the financial and economic system is  expecting from the Government. Our goal is to make sure that business  breathes easily. In this regard, I expect you to submit proposals as  to what specific measures we need to take to provide additional  lending for the economy. It is time to suggest practical solutions,"  Karen Karapetyan noted.

The Prime Minister invited the banking system representatives to  develop appropriate mechanisms for SME lending using the assets  available with the banks in order to activate individual sectors of  the economy.

Central Bank Chairman Artur Javadyan presented the monetary policy,  as well as the overall situation in the sphere of economic lending.

Summing up the meeting results, the Head of Government instructed the  ministers in charge of the financial and economic bloc to discuss the  proposals and continue working closely with the banking system  representatives in an effort to address the issues raised and  implement various programs in the specific fields.

According to ArmInfo's Financial Rating of Armenian Banks, at present  there are 19 banks in Armenia. As of 1 July 2016, the banks'  aggregate total capital was 582.6 bln AMD, assets - 3.5 trillion AMD,  with 67.6% or 2.4 trillion AMD of this amount being provision of  crediting. Lending to economy sectors totaled 1.5 trillion AMD. The  share of SME lending the loan book of the banking system was about  27%, or 605 bln AMD (with a 12% year-over-year growth). The revenues  from lending grew by 4% over year, while the expenditures on deposits  increased by almost 20%. The share of NPLs in the loan book exceeds  13%, while the international critical range is 10-15%, and the  absolute value of NPLs grew by 37% over year, concentrating mostly in  trade, industry, agriculture, and construction. In H1 2016, the  banking system's profit amounted to 12.4 bln AMD, including 9.3 bln  AMD in Q2 2016 alone.