NASDAQ OMX Armenia: Stocks of Unibank were shifted up from the Secondary (B) list of stocks to the Main (A) list 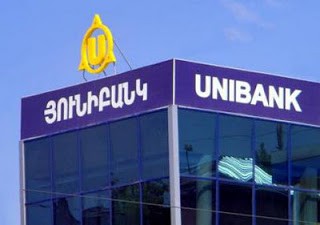 ArmInfo. Starting from October 20, 2016, additional issue of common nominal stocks by "UNIBANK" OJSC, placed in July, 2016 will be listed on NASDAQ OMX Armenia and included in the stocks' Main list (A), the press-service of NASDAQ OMX Armenia informs. On October 17, 2016 the Bank's stocks were shifted up from the Secondary (B) list of stocks to the Main (A) list of stocks.

Listed securities comprise 12,173,914 stocks (ISIN - AMUNIBS10ER5) with nominal value of AMD 100, which will be traded under UNIB ticker symbol and will be allowed to manual and REPO trading as well. The total number of the Bank's stocks listed amounts to 144,547,732. To recall, on 27-29 July, 2016 placement of the Bank's above mentioned additional shares took place at NASDAQ OMX Armenia. The whole announced volume - 12,173,914 common nominal stocks, was fully placed on the first day of placement and the Bank attracted AMD 2,800,000,220 as a result of 48 deals. The price of a stock stood at AMD 230.

According to Unibank's statement the Bank's stocks were shifted up from the Secondary (B) list of stocks to the Main (A) list of stocks due to significant increase of amounts.  Currently the share of Unibank's freely circulating stocks totals 15.8%, which testifies to growth of amounts of trade and high liquidity of these During the recent 12 months Unibank has made 3 issues of stocks and one more issue is planned in autumn this year.

Full placement of these issues allowed the bank to significantly increase the capital (by almost 41% y-o-y ensuring more than 31 bln drams). According to the bank along with increase of capital Moody's Investors Service upgraded its forecast on credit ranking to "Positive"(the matter most likely concerns "stable forecast", however the bank does not mention the level of ranking in rating scale-ed note).

To note, Unibank CJSC was founded in October 2001 and became JSC in 2015 on the threshold of IPO (during the extraordinary session on 12 March 2015 approved by CBA on 23 June 2015). As of July 1 2016 the stakeholders of the bank are Gloveri Holdings LTD-93.5%, Gagik Zakaryan and Georgy Piskov - 3.25% each. These bankers, the former owners of the Moscow-based Uniastrumbank and the current majority shareholders of the UNIStream money transfer system are the owners of Gloveri Holdings LTD offshore company. As of today the bank has 45 branches and a representation office in Moscow. The bank is a member of stock exchange since 2008 and is a member of securities settlement system since July, 2015.