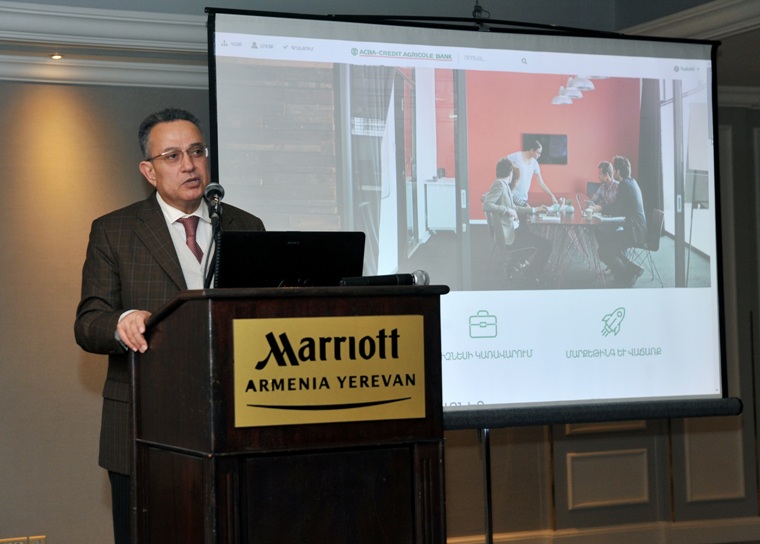 ArmInfo. Acba-Credit Agricole  Bank presented sme.acba.am website to around 200 enterprise  representatives from various spheres of economy. The website is aimed  at becoming a free platform for online business management and  development and being accessible for everyone. It was brought out as  a result of the broad cooperation with the International Finance  Corporation (IFC), member of World Bank group. The sme.acba.am will  be launched in December, the website of the bank informs.

According to the source the beginners and currently active  businessmen have an opportunity to download learning materials and  videos via the online platform, use a number of business tools and  various financial calculators. It is also intended to become a unique  platform of cooperation for SME representatives opening great  opportunities of mutually beneficial cooperation for them.

"We have always been a socially responsible bank. This is the reason  we want to have constantly developing customer-partners, and this  momentum allowed us to have the results like this after three years  of hard work. In the future, we are planning to expand the domain of  the online platform and include the agricultural sphere as well",  said the Chief Executive Officer of ACBA-CREDIT AGRICOLE BANK Hakob  Andreasyan.

"Creating an opportunity for the SMEs is one of IFC's strategic  priorities globally and in Armenia as well. This new platform is a  result of the mutual efforts of the Bank and IFC and is aimed at  providing the SMEs knowledge necessary for development.  We highly  appreciate the commitment of the Bank to lead this initiative", said  the IFC South Caucasus regional manager Jan van Bilsen.

To recall, Armenia became an IFC member in 1995. Since then, IFC's  long-term investment commitments have totaled $340 million, including  nearly $23 million mobilized from other lenders, financing 47  projects across a range of sectors. IFC has also supported trade  transactions worth around $130 million through its trade finance  program, and implemented a number of advisory projects focused on  private sector development. In fiscal year 2015, IFC invested almost  $18 billion in developing countries worldwide. IFC, a member of the  World Bank Group, is the largest global development institution  focused on the private sector in emerging markets. Working with 2,000  businesses worldwide, we use our six decades of experience to create  opportunity where it's needed most.