Arshaluys Margaryan: There are no non-risky debts; managers` task is to minimize all the risks 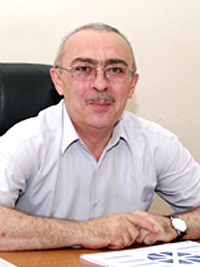 ArmInfo. "Debt is not so black as it is painted", officials, responsible for the field, are stating. Should we press the panic button and live an ascetic lifestyle or continue to borrow "smartly''? Head of Public Debt Management Department of Armenian Finance Ministry Arshaluys Margaryan comments on the situation with state debt of the country and the level of its management in an interview to ArmInfo's correspondent.

During the recent years Armenia has consistently increased the state debt by 6-7% at average. As of October 31 aggregate state debt reached $5 bln 607 mln, while by the end of the year it will grow to 54.6% of the GDP. Already in 2017 the level of state debt is forecasted at $6.245 bln or 56.1% of the GDP. It is not surprising that forecasts are being made that Armenia will face economic collapse or, to put it bluntly, "default". Is this true and how close are we to such a scenario?

I want to note that not always default is the result of the country's state debt, as it also can be the result of political decision, as this happened in some Latin American countries. The authorities take a decision and state: "We will not pay and that's that" and the country faces default. This is inadmissible for us and those responsible for the sector in Armenia will never make such a decision.

Throughout all these years of state debt formation Armenia has been working on creating due reputation of the country and its maintenance on the world financial markets. And I, as an official responsible for the sector, state that today there is no reason for being concerned of both the amount of state debt and possible difficulties in its servicing and managing. Our specialists increase their experience and skills of debt management day by day, while debt portfolio is under close supervision of experts.

As for the amounts, or to be more precise, the threats related to its increase I want to note that Armenia's state debt is "measurable and explainable" and on the current stage is not dangerous in terms of recognizing the country as bankrupt. According to the schedule our repayments are made in equal parts and in such a way that even in conditions of minimal economic growth Armenia annually increases its ability to service the country's state debt.

Mr. Margaryan, according to the data of Armenia's Finance Ministry in 2020 nearly $921 mln will be spent on redemption and servicing of the state debt formed by today. Repayment of interest rates will make $164 mln of it. May it become necessary to restructure debt on certain stage till 2020?

Armenia's state debt redemption schedule is made till 2052 and there are no problems related to its servicing. In the structure of state debt 73.7% are long-term debts, 22.5%-mid-term (9.3 years) and 3.8% short-term debts. At the same time 88.5% of governmental borrowings were made at fixed interest rate.  These figures fully correspond to state debt management strategy. As for the $921 mln to be paid in 2020, this amount seems scary at first glance only: the Finance Ministry plans to pay $500 mln of it via such a financial instrument as issue of Eurobonds. To recall, Armenia launched its debut issue of bonds in Sept 19, 2013. The volume of the issue was $700mln, the yield of the bonds - 6.25%, the maturity - 7 years. The second issue of sovereign bonds in the amount of $500 mln, 10-year maturity and 7.5% yield took place on 19 March 2015. Part of the amount received from the sale of these bonds ($205 mln) was spent on the buyout of the first issue of the bonds. The remaining part was transferred to the treasury account of Armenia and to the budget system of the country. Atom Janjughazyan (Deputy Finance Minister of Armenia-ed. note) said that the second issue of Eurobonds proved to be successful. The deputy minister is convinced that if the country failed to buy out $200 mln of the debt in 2015, the state debt serving in 2020 would not cost $921 mln, but much more, which  "would become a real horror for the budget". In this context believe me the third tranche of Eurobonds will be issued till September 2020; this means that it will be prior to the first repayment of first Eurobonds. The exact dates of the third issue will depend on the environment of international markets. The right choice of moment will determine the efficiency of the bonds and their further yield.

At the same time we have to pay for Eurobonds as well. As the experts were stating after the second issue of Eurobonds it in fact turned out to be the most expensive external borrowing, which has ever been attracted by the state government, plus the threats related to appreciation of dollar, considering that significant part of the government debt is attracted in this currency.

I assume that some may be concerned of redemption of interest rates of Eurobonds; I mean the terms of it.  However, all the possible risks were considered when entering the market of Eurobonds. Possibly one time and large-scale repayments on Eurobonds could lead to significant difficulties for the country's tax budgetary system. But I do not know any country that has used such a practice of issuing Eurobonds in foreign currency, in large amounts and redeem them all at once. By entering this market we just become its participants and prior to each repayment new issue is made in the same amount or much bigger.

As for the concerns related to appreciation of foreign currency, according to our calculations Armenian economy will reach the critical threshold in terms of servicing state debt in case one morning we wake up and find out that Armenian dram has depreciated against US dollar by 40%. However, it is quite unlikely.  When models of market manipulation are planned the highest fluctuations posing certain threats for the country's economy are imagined at 30%. Devaluation of the Armenian dram against US dollar to 20% will not create problems regarding servicing of Armenia's state debt. In 2016 considering such risks and for their mitigation we started to attract internal resources in larger scales. As a result the share of internal debt grew in the structure of state debt by 4%. A number of events is planned for developing retail market of state bonds. As of today 1000 physical entities-Armenia's citizens keep their savings in state bonds, which are amounting to 4 bln drams.

As of today potential of Armenia's domestic market has not been fulfilled. I want to note that in the second half of the 20th century Freedom and Democracy Institute in Lima headed by its founder Peruvian economist Hernando de Soto conducted interesting survey on this issue. It turned out that the more a country's economy is developed the less people keep their savings under the mattress. While research in countries such as Egypt and a number of Asian countries has demonstrated that citizens' savings exceed the country's state debt ten-fold. Thus, if we manage to create climate of confidence to the government and economic policy these savings will become unlimited source of increase of domestic market of state loan liabilities.  Today the number one task faced by the Armenian government and Finance Ministry is ensuring stability of the state debt to GDP on the level of 50-55%. Our further mission is to work at its reduction, at the same time we clearly realize that the only possible way of it is to ensure growth of GDP. In other words it is non realistic to talk about reduction of state debt today or tomorrow as we cannot allocate money from our lean budget to redeem the state debt. These funds were attracted for certain purposes-development of infrastructures, solution of social problems and creating additional value. The main task is in the management of the process. There are no non-risky debts. The managers' task is to assess all the possible risks and based on the analysis of these risks to form a portfolio minimizing all the risks.