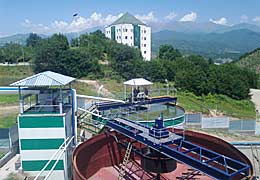 ArmInfo. On 26 December Artsakh Republic President Bako Sahakyan visited the Kashen mining complex of the "Base Metals" CJSC and got acquainted with its activities.

The President convoked a working consultation on site with the senior staff of the company, discussed existing issues and future plans, the press-service of the NKR President informs.

To note, on March 9, 2012 Nagorno-Karabakh's government and Vallex Group CJSC signed an agreement on organization of mining industrial activities in Kashen deposit in Martakert region. The exploitation of new Kashen (Tsaghkashen) deposit was launched last year. Vallex Group Company has planned to invest around 80 mln USD in the deposit development in ten years.  The specialists say that Kashen deposit is not as rich with gold as Drmbon deposit but copper and molybdenum deposits are enough for launching wide-scale industry. If Drmbon plant produces to up to 350 thousand tons of ore annually, Kashen plant will have a capacity of 1 mln 600 thousands tons of ore per annum. 17 mln tons of ore will be extracted and processed in 10 years. 1200 new jobs will be opened due to deposit exploitation.

To note, Vallex Group CJSC was established in 1998 and has more than 20 affiliated and subsidiary companies, among them: "Armenian Copper Programme (ACP) CJSC ", exploiting Alaverdi Plant, CJSC "Base Metals", which exploits copper-gold deposit in Drmbon village in Nagorno-Karabakh and CJSC "Tekhut", established in 2006 for coordinating Tekhut project.