In 2017 INGO Armenia to intensify "digitization" of insurance services 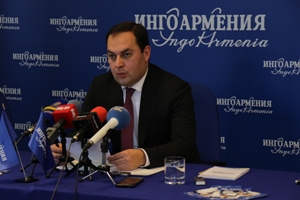 ArmInfo. In 2017, INGO Armenia is going to switch to "digitization" of services, INGO Armenia CEO Arevshat Meliksetyan said at a press conference on December 28. He noted that a week before the company launched an online system of motor third party liability insurance (MTPL), which will allow the customers to sign insurance contracts and make payments.  "Within the next 2 months, we are going to launch online payments for tourism insurance contracts," he said.

"According to our surveys, over 400 thsd citizens in Armenia actively use various e-payment systems when purchasing goods and services. The e-format of insurance services is in high demand today. The transition to digitization will enable facilitation of relationships with the customers, who will from now on be able to conclude insurance contracts with us from any corner of the world," Meliksetyan said.

In the meantime, the key direction in INGO Armenia activities in 2017 will be expansion of the insurance products and services for individuals. In this light, Meliksetyan pointed out that in early 2017 a new product will be launched - voluntary health insurance for individuals. This product will annually be expanded and it is an affordable product for the population. He added that in 2017 the company will also take measures to enhance the quality of services and increase the customer base. Meliksetyan noted that on 1 April 2017 a system of direct MTPL indemnities will be introduced. That is to say, the aggrieved party will receive the indemnity from the insurance company his/her car is registered. The company, in turn, will retrieve its amount from the company, where the offending party's car is registered.  So, the car owners will deal with their own insurance company. This will allow enhancing the quality of servicing of insurance contracts and resuming the principle "Each insurance company serves its own customers".

The head of the company also pointed out that this year the funds allocated for the traditional corporate party will be directed to the Fund compensating for the harm to servicemen's life or health. "In 2017 we will keep supporting our servicemen," he said.

Meliksetyan presented INGO Armenia's results for 2016: assets amounted to 11 bln AMD, liabilities - 7 bln AMD, own capital - 3.9 bln AMD, net profit - 900 mln AMD, taxes paid to the state budget - 400 mln AMD. In 2016 the company paid out 3.4 bln AMD in indemnities, including 1.9 bln AMD in MTPL and motor own damage insurance, and 1 bln AMD in health insurance. The staff was enlarged by 14% to 267, and the number of insurance agents totaled 1,500. The company serves nearly 200 thsd individuals and 1,300 companies. Solvency of INGO Armenia exceeds the regulatory indicator by 50%, and liquidity is twice as high as the regulatory indicator. This year, INGO Armenia received The Best Subsidiary Award- 2016 from INGOSSTRAKH among 17 other companies in the CIS. "Such results were achieved due to comprehensive risk assessment and balanced investment policy," he said.

INGO Armenia has been operating since September 1997. 75% of its capital belongs to Invest Police CJSC (a Russian company owned by INGOSSTRAKH), and 25% - to Levon Altunyan.