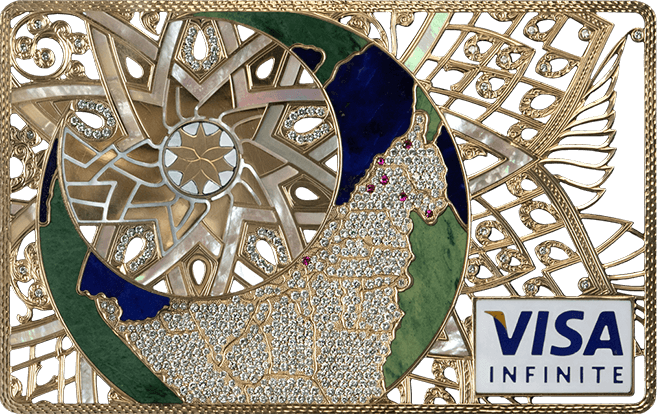 ArmInfo. VTB Bank (Armenia)  makes an exclusive offer to its prime customers - Rosan Diamond  jewelry cards. The Bank's press office has told ArmInfo that the  cards operate on the Visa Infinite platform and include the package  of services offered by Visa and VTB Bank (Armenia).

The source says that an Art Collection card features a chip, but does  not have a magnetic stripe, personal information embossed and CCV  code, which makes it more secure. A standard plastic card companion  is issued in addition to the jewellery card in order to use it at the  ATMs, POS terminals, which do not support "chip and pin" technology,  and for the internet payments.

The Rosan Diamond Art Collection cards are handmade cards designed by  high-skilled jewelers, who create them with gold and other precious  materials with embedding of the precious gemstones. The cards are  unique and can be both acquired from the Rosan Diamond collection and  created by each customer's individual order. Art Collection cards do  not expire and can be used for more than one generation. This unique  feature arises from the possibility to replace the card chip upon its  expiration.

According to ArmInfo's Analytical Review "Armenian Banks in Card  Business", VTB Bank (Armenia) retains leadership on the market of   plastic cards both by the number of cards and the amount of   transactions.  By 1 October 2016, the number of active cards of the  Bank made up about 518 thsd, with almost 79% or 408 thsd being Visa  cards. As compared to the same period of 2015, the Bank increased the  total number of cards by 12.1% (the number of MasterCards grew  4.5-fold, while the number of Visa cards dropped by 4.5%. In Jan-Sept  2016, the transactions with plastic cards of VTB Bank (Armenia)  amounted to about 160 bln AMD (down 11.5% versus Jan-Sept 2015),  including 147 bln AMD ATM transactions (up 9.1%). As of 1 Oct 2016,  the Bank had 346 POS-terminals and 156 ATMs. Before 2013, VTB Bank  (Armenia) issued and served only VISA international cards. In Sept  2013 it became a full member of MasterCard Worldwide and started  issuing and serving Cirrus/Maestro, MasterCard Standard and  MasterCard Gold cards. Along with this, the Bank serves local ArCa  cards. The Bank has a processing center of its own.

To recall, VTB Bank (Armenia) joined VTB Group in April 2004 and is   fully owned by VTB Group, the second biggest bank in Russia. VTB Bank   (Armenia) is one of the leaders of Armenia's banking sector.  The  Bank has 67 branches throughout the republic.