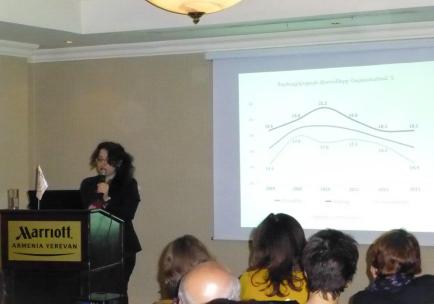 ArmInfo. According to the  report developed by Economic Development and Research Center (EDRC),   Armenian Government forecasts  in 2017 an economic growth at 3,9%   within an  increase tendency up to 4% and 4,1 % in 2018 and 2019  respectively. This was stated by Moushegh Toumasyan, the EDRC  Chairman, on March 09, while presenting the Economic report 2016,  accentuating that the forecast is developed within the framework of   state expenditures middle term program.

According to EDRC research, foreign state dept will amount 39% PPP in  2017 within the tendency of decrease in 2018 and 2019 to 38% and  37.5% correspondently. At that, Tumasyan emphasized that within the  improvement of forecasted economic growth in Russia to 1%, reduction  of transfer flows from Russia will stop in Armenia. However, despite  these outlined tendencies of development, he pointed out that Armenia  has significant foreign dept  lade and problems, related to  unsustainable tax policy.

From his side, Deputy Minister of Economic Development and  Investments of Armenia Tigran Khachatryan, expressing gratitude  for  prepared report, emphasized the importance the work done by the  Centre. He noted that the start of the year was marked with  the  growth of gross industrial producing to 17% on the growth of export  over 35%, which, according to him, is in certain level the basis to  relay on positive outcome, related to economic indexes. In this  relation Khachatryan emphasized that reported results should not be a  reason for  tranquility, on the contrary, those should lead to  further steps. "I understand that public  wants to see more  considerable results, but hard times also have their positive sides,  leading to increasing stability and competitive ability of economy,  which helps to display the week sides and find effective decisions,"  he noted.

To note, when the journalists tried to talk with the Deputy Minister  about pronounced forecasts more detailed, Khachatryan asked to wait  till the end of the event. However, the Deputy Minister soon left the  event and did not keep his promise.  To recall the annual report EDRC  passes in Armenia 7th year by order of GIZ and Ministry of Economic  Collaboration  and Development of Germany .  To note, the World Bank  forecasts Armenian GDP growth at 2.7% for 2017, the IMF - at 3.4%,  the Eurasian Development Bank - at 2.9%, Fitch - at 2.1%, and the  Armenian state budget mentions 3.2% GDP growth for 2017.  In Jan-Dec  2016, the economic activity growth in Armenia slackened to 0.5% from  3.1% in 2015, with services (7.1%) and industry (6.7%) remaining the  economy drivers.