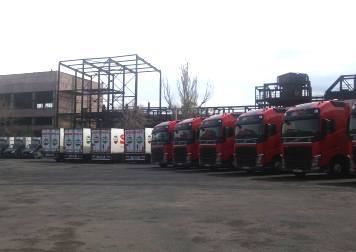 ArmInfo. The total extent of Spayka expeditor company investments, working also on export and sale of fruits and vegetables to Russia, CIS countries and Europe, on agricultural goods development in 2017 will total $68mln. This was stated to the Armenian President Serzh Sargsyan by the company's representatives on April 19 during the visit to head office of agro holding. The President visited  VOLVO company's center fitted by modern technologies of service, and the canning factory  of the company, got acquainted with figures on agriculture products export and future plans.

According to company's representatives, in 2016 Spayka investments in greenhouse complex for 35 hectare on tomato and cucumber processing, in fleet vehicles work, creating 60 hectare intense and 20 hectare traditional apricot fields, totaled $86 mln. By the end of 2017 the total extent of investments from 2009 will form $154mln.

As Karen Baghdasaryan, the director of project management department informed ArmInfo's journalists, according to scheduled investments results for 2017, the territory of modern energy conservative greenhouse complex Greenhouse will be extended to 55 hectares with a productivity rate of 25 thousand ton annually, and the platform of intense fields will be extended to 1060 hectares.