Ameriabank: Among 2,700 participants in the joint Visa action, 77% were holders of Classic and Electron cards 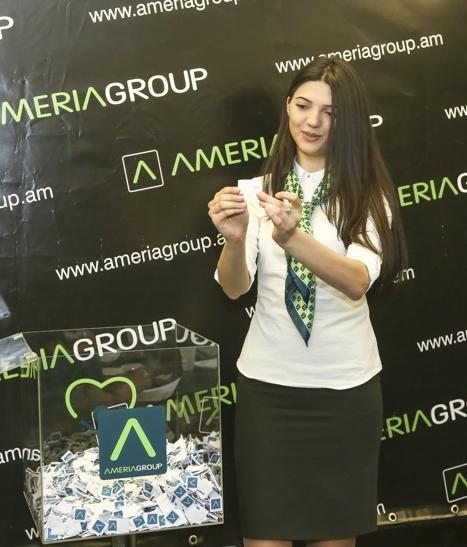 ArmInfo. In the next joint action of Ameriabank with Visa, 2,700 cardholders participated, 77% of which were owners of Visa Classic and Visa Electron cards. On April 21, during the summing up of the results of the action, the project manager for retail banking and retail of Ameriabank Elen Danielyan informed that comparing with 2016 in the similar campaign the majority of participants were holders of Premium-class cards.

As a result of the action, which took place from February 23 to April 11 2017, a draw was held among participants who made non-cash payments with VISA cards (excluding Business cards) for the amount equivalent to at least 100 thousand AMD.

To each cardholder who meets the requirements of the action, an SMS message with an individual participation number in the drawing was sent in advance. In the framework of the lottery held in the head office of Ameriabank, the winners were the owners of numbers 1240 and 1676.

According to the terms of the action, the winners will receive a ticket for two to the semifinal of the Eurovision Song Contest, which will be held in Kiev. The cost of air travel and accommodation at the hotel is also included in the tour. Winners can receive prizes at the head office of Ameriabank from April 21 to 26 inclusive. After the specified period, prizes are not issued.

According to the analytical review "Armenian Banks in the Card Business" prepared by IC ArmInfo, Ameriabank is among the top ten in the total number of active cards - over 70 thousand units. On October 1, 2016. According to the number of active Visa cards, the bank holds a position in the top five - about 52 thousand. The number of active MasterCard exceeds 11 thousand units, and local cards ArCa has about 7 thousand units. The number of Visa cards Ameriabank increased 12% in annual terms, and MasterCard - by 28.2%, while reducing by 37.9% the number of local ArCa, resulting in the total number of active  cards of the bank increased by 5.9%. In terms of plastic transactions, Ameriabank has become TOP-5, with about 84 billion drams for the 9 months of 2016 (annual growth of 8.2%), of which over 63 billion drams accounted for the share of ATM transactions (annual growth of 20.5%). In terms of coverage of the ATM network, Ameriabank also has 108 ATMs in the TOP-5, while the second position - 87 ATM -  is held in the number of ATMs in the city. The bank has 1195 own POS- terminals, and this is the 2nd position in the market. Ameriabank increased revenues from servicing payment cards by 16.4% to 1.3 billion drams (3rd position) in 2016, more significantly increasing expenses on card maintenance by 40.9% to 407.3 million  drams (5 Position), keeping the 2nd position in terms of the growth  rates of these balance sheet items. Ameriabank is a universal bank  that provides investment, corporate and retail banking services in  the form of a comprehensive package of banking solutions. The bank  has been operating in the Armenian market since October 31, 1996. The  branch network of Ameriabank today has 14 divisions: 8 - capital and  6 - regional.  As of January 1, 2017, the Bank's shareholders are  Ameri Group with 65.8% equity interest, EBRD - 20.7% and ESPS Holding  Limited - 13.5%.