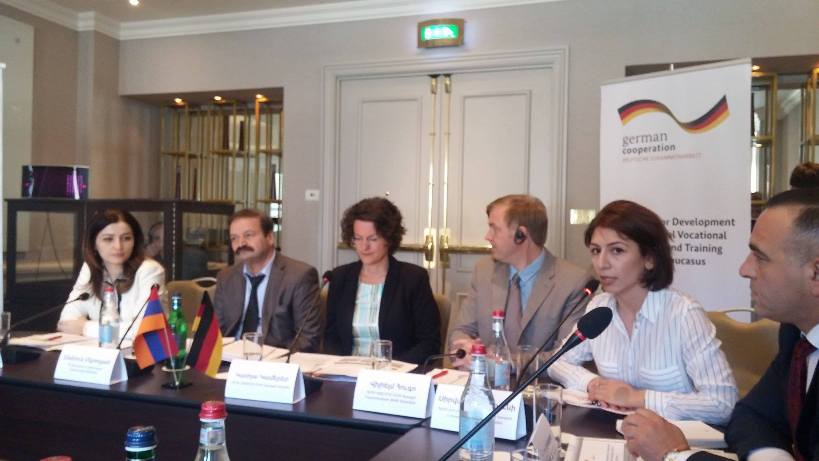 According to Katie Kamerer, the director of PSD TVET program, in  reality the aim of the program's 3rd stage, being implemented in  Armenia almost for 10 years,is the  stimulation of green  (sustainable) economy resulted by professional and technical  education development in spheres of tourism, winemaking and concrete  engineers. The program, as she thinks, can become the best platform  for experience exchange between the countries, increased professional  skills of the trade and finance literacy market participants of SME  representatives, as well as the integration of Syrian Armenians at  the country's economy.

According to Wilhelm Hugo, the Armenian office director of the  program Armenia is in a very difficult geopolitical state, having at  that minimum of natural resources. At the same time, the country is  rich with human potential, which is being used not so efficiently  today. "The problem is the low level of cooperation between the  Republic and private sector. Resulted by the implementation of this  program in Armenia we hope to arrange necessary cooperation", he  said. According to the head of the office, after the implementation  of the program the situation of employment will improve in the  country, particularly, in country's provinces, as well as to increase  the level of private sector's involvement in preparing process and  retraining of the experts in accordance with market's demands.

GIZ representatives expressed the satisfaction with the results of  first two stages of the program, when the main conceptual approaches  were functioned in average professional education sphere and  educating courses are arranged. "We are glad that we found many  talented people in Armenia, giving them a chance to increase  professional level. The results of our work are very important for us  in Armenian provinces, particularly, in Vayots Dzor, Gegharquniq.  This will allow to provide high level of professional and technical  education in Armenia, integrating into the system professional  education and teaching of employees and making the experts more  competitive", Wilhelm Hugo said.

To note, ArmInfo's attempts to get information about funding of the  program, also the first two stages, were failed.