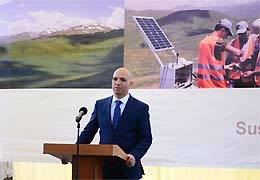 ArmInfo. The developing of Amulsar  golden deposit is one of the largest investment projects in Armenia. This was stated by  Hayk Aloyan, the General Executive  of Lydian Armenia to  Suren Karayan, the Minister of Economic Development and Investments of Armenia.

Presenting  general investment and technical  features of the project to the Minister, Aloyan accentuated that the deposit survey and studies investments formed USD 90 mln, and the total volume of investments prior to the operation of the deposit will form about USD 370 mln.  Within the implementation  of construction works 570 employees have been already involved, with those 1300 planned to be involved for whole the process of construction. In the future, when the deposit will be put under operation, about 700 laborers will be involved as well. Hayk Aloyan mentioned that the first golden bar will be obtained from deposit in the Spring of 2018. "We undertook a responsibility to implement a perfect project, which is under  monitoring of international investors. The investment image of the country depends on the success of Lydian," Aloyan said.

In his  turn, Suren Karayan stated the willingness of Armenian Government to provide support to international investors, which will be of a great use not only for the country's economy, but will bring also the best international practices and economy of Armenia, increasing the GDP for 2%.

To note, Lydian Armenia is subsidiary of British Lydian   International, the shareholders of which are institutional investors   from the USA, Great Britain, a number of European countries,   including IFC and EBRD. In August 2016, the start of a project  involving the construction and development of the field was launched.  Preliminary work has been carried out since 2006. The operation life  of the Amulsar will be 10 years and 4 months, annually it is planned  to produce an average of 200 thousand ounces of gold (about 10 million tons of ore). Within the framework of the Amulsar program,  1,300 jobs will be created in the construction process (construction  works will last about 2 years) and 650- 700 jobs throughout the  entire operation of the field. The shareholders of the company are  also international institutional investors IFC and EBRD. The  company's shares are quoted on the Toronto Stock Exchange. The  Amulsar deposit is the second largest in Armenia.