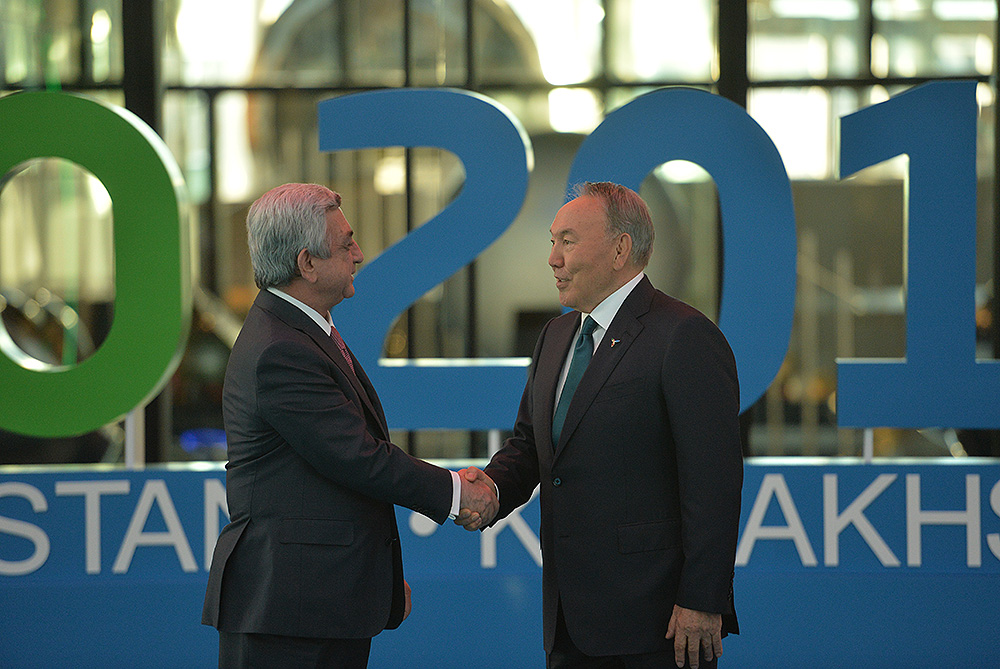 ArmInfo. Armenian President Serzh  Sargsyan, who is on a working visit to the Republic of Kazakhstan,  attended the official opening ceremony of the international  specialized exhibition Astana Expo-2017 held under the motto with the president of the host Nursultan Nazarbayev,  the heads of other delegations visiting Astana, in the congress  center.

According to the press service of the Armenian leader, before that  President Sargsyan visited the exhibition complex where the heads of  the delegations of the participating countries gathered for a  protocol joint photo, after which he visited the Central pavilion  "Nur Alem", at an equal distance from which all National pavilions.  At the exhibition devoted to alternative energy sources and green  technologies, the participating countries presented the world's best  energy saving technologies, the latest developments in the use of  alternative energy sources.

Earlier it was reported that 115 countries and 22 international  organizations (UNESCO, UNIDO, World Bank, etc.) confirmed their  participation in the exhibition. In the exhibition devoted to  alternative energy sources and "green" technologies, which is named  "Energy of the Future", the participating countries will present the  best world energy saving technologies, the latest developments in the  field of using alternative energy sources. On the territory of the  exhibition, the area of which is 25 hectares, the key and main  pavilion will be a building made in a spherical form called "Nur  Alem", the thematic concept of which is presented as the "Museum of  Future Energy". On 7 floors of the spherical building the main types  of energy will be demonstrated - the energy of space, sun, biomass,  wind, water and kinetic energy, and the eighth floor will present the  exposition .

As Ambassador of the Republic of Kazakhstan to Armenia Timur Urazaev  informed in Yerevan on May 25. It is expected, a large influx of  tourists to this important event, which will be held from June to  September this year. In addition, post-representatives will attend  all the time of the passing through from more than  110 countries, including Armenia. Theme" EXPO -2017 "is the energy of  the future. It would seem a rather unusual name for the  energy-producing state, but we believe that we need to move to a  world free from pollution, and we are consciously moving in this  direction," Urazaev said.