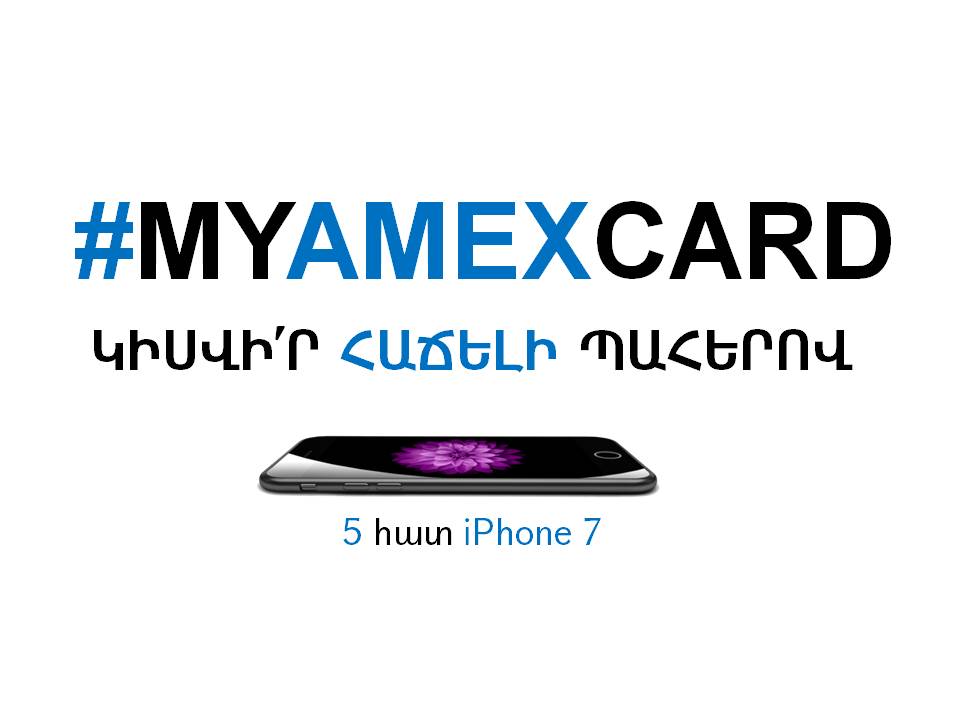 ArmInfo. ACBA-Credit Agricole  Bank announces the start of the action with a draw for American  Express cardholders. As the press service of the bank told ArmInfo,  by September 10 this year, by making a purchase at any retail outlet  or service center in Armenia or another country for the amount  starting from AMD 1 thousand (or in currency equivalent), cardholders  will have an opportunity to take part in the draw of Four smartphones  iPhone 7.

According to the source, in order to participate in the draw, you  need to take a picture of the map logo or the entire card (without  data) after the purchase, and then upload this photo to Facebook with  the title #myamexcard, indicating the name of the outlet where the  payment transaction was made (for example, #acbacreditagricolebank)  or location, if it is available on the map (location). "The more such  publications are done, the greater the chance of winning," reads the  official announcement of the Bank.

The source informs that four iPhone 7 will be raffled among  cardholders who published photos with the title #myamexcard and one  more phone can be won by someone who on his facebook page shares this  publication, without being an American Express card holder.

The raffle of phones will be held on September 20 with an online  broadcast. Terms of the competition are available at  https://www.americanexpress.com/content/dam/amex/am/network/documents/MY%2 0  AMEX%20Card%20TermsConditions.pdf

To note, "ACBA-Credit Agricole Bank" CJSC has been operating in  Armenia since 1995. Since September 2006, the largest European  banking group Credit Agricole SA has been the majority shareholder of  the bank. With a 15.56% interest in the capital, followed by the  participation of SJSC Sacam International (a member of the Credit  Agricole SA group) in the amount of 12.44%, along with which there  are 10 regional Unions of Villagers Mutual Assistance). The bank is  among the leaders in terms of coverage of the branch network and the  number of regional branches.