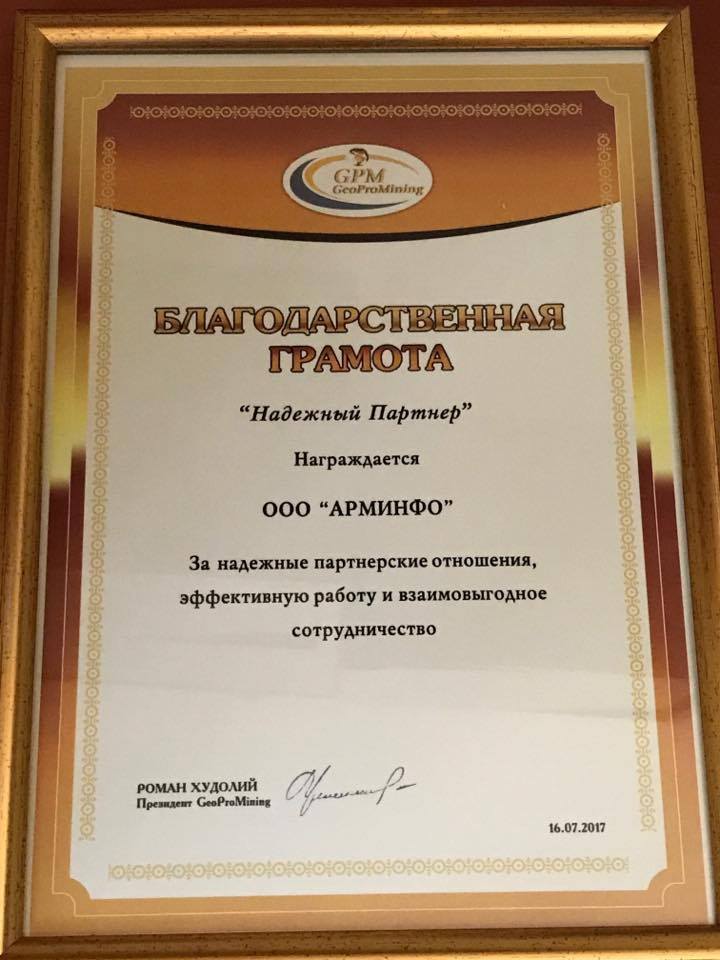 ArmInfo. ArmInfo was awarded  with a letter of gratitude Reliable partner of GeoProMining group of  companies and an honorary medal For reliable partnership relations,  effective work and mutually beneficial cooperation.

ArmInfo was awarded a certificate of honor and an honorary medal  on July 14 in Ararat, Ararat district of Armenia during the ceremony  of awarding employees and traditional partners of the Company in  connection with the anniversary, 10-year anniversary of the presence  in Armenia, as well as the professional holiday of the Day of Miner  and Metallurgist. On July 13-14, in the cities of Vardenis, Ararat  and Agarak (the cities where the Company was present in Armenia),  employees and traditional partners of the Company were rewarded with  jubilee medals and letters of gratitude.  Best employees were awarded  with prizes. As part of the social policy to support local  communities, the Company provided them with a gift for the needs of  cities. Within the children's festival "The City of My Childhood" a  children's entertainment program was organized in these cities, where  the favorite characters of cartoons and fairy tales took part;  Moderators, clowns and magicians who will entertain children with  games and contests. Concerts took place, in which the participants of  local schools took part. The authors of the best works  received  gifts from the company. The events ended with a festive concert with  the participation of pop stars in the cities of Vardenis, Ararat,  Agarak.

GeoProMining, founded in 2001, is an international private  company with a diversified resource base of gold and other metals. In  Armenia, the companies own Agarak Copper-Molybdenum Combine and GPM  Gold, which develops Sot gold mine and Ararat gold recovery plant.