The construction of a large water bottling plant started in Artsakh 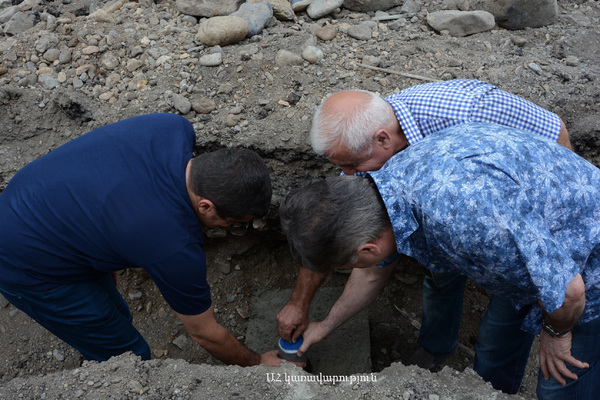 ArmInfo. The heads of the  governments of the Republic of Armenia and Artsakh Republic Karen  Karapetyan  and Araik Harutyunyan took part in the ceremony of laying  the foundation of the plant for bottling water in Karavachar town of  Shahumyan district of Nagorno-Karabakh on August 15.This was reported  by the press service of the NKR executive body. As Araik Harutyunyan  stated at the ceremony, the construction of the plant for production  and bottling of water, oriented to export, is carried out at the  expense of foreign investments. The project will have a significant  impact on the socio- economic development of the region, since for  the first time it will provide about 50 new jobs and stimulate the  development of infrastructures of adjacent territories. "In this  context, the government is ready to assist in the implementation of  the project," said Araik Harutyunyan, without mentioning either the  investor or the amount of investments.

The heads of government also got acquainted with the construction  works on the motorway Vardenis (Armenia) - Martakert (NKR). The sides  stressed the importance of the road, both in strategic and socio-  economic aspects. They also visited the construction site of HPP  Lev-1 on the Lev and Dzhermajur rivers on the Tartar River, got  acquainted with the production capacities of power generation  facilities. According to the head of the Artsakh Cabinet of  Ministers, thanks to the construction of various hydroelectric power  stations, the republic became energetically self-sufficient.

It should be noted that the construction of the Vardenis (Armenia) -  Martakert (NKR) motorway with the length of 116 kilometers as a  strategic program approved by the Board of Trustees of the Hayastan  Fund will provide an alternative link between Armenia and the NKR.  The new road will not only activate the lives of 22 small and large  communities along the route, but also contribute to the development  of tourism and the economy of the two countries as a whole.

Earlier it was reported that the approximate cost of the road  reconstruction project is $ 30 million.  According to the data of the  Ministry of Economy of Artsakh, in the first half of the year in 2017  electricity production in the country increased by 16.6 million kWh,  or 9.87%, to 184.9 million kWh, compared to the same period last  year. To date, 16 hydropower plants operate in Artsakh, including the  Sarsang hydroelectric power station with an installed capacity of 50  MW, and 15 small hydropower plants with a total capacity of 56.4 MW.  Only in 2017 two small hydropower stations - "Dzhermajur" (10.3 MW)  and "Viking" (1.8 MW) were put into operation. At this stage, another  9 small hydropower plants are being constructed, the total annual  electricity production will be about 263.02 kWh.