Textile industry of Armenia is represented at the fair in Moscow 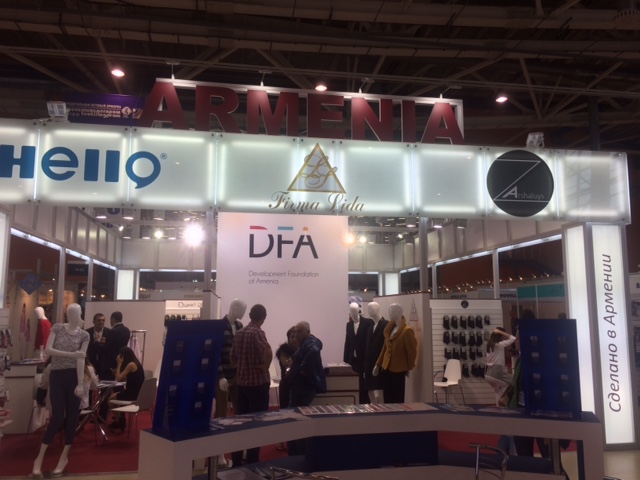 ArmInfo. With the support of the  Armenian Development Fund (ADF), 6 Armenian companies representing  the textile industry of the republic presented their products with a  single pavilion at the international trade fair "TextileLegProm -  2017 "in Moscow. The Armenian companies Lentex, Hello, Alex Textiles,  Lida Firm and IP Kamsar Darpinyan within the framework of the 49th  Federal Wholesale Fair" Textillegprom ", which this year runs from  August 29 to September 1, presented a collection of knitwear,  clothes, as well as hosiery products.

As the press service of the ADF reports, Armenian companies,  participants of the former "TextileLegProm", have already received  orders for the supply of their products. According to Marcus Azadyan,  the representative of the Federal Republic of Germany, only according  to the results of participation in the February exposition, Armenian  producers received orders for the amount of 400 million drams. In  this case, as noted by Azadyan, the number of orders increases after  each exhibition

The largest wholesale fair of textile and light industry goods  "Textillegprom" is held twice a year. More than 200 companies from 28  countries participate in the event. At the fair, more than 35,000  visitors are expected, including wholesale buyers, textile  specialists, distributors, representatives of various retail chains  and importers. Within the framework of the event, there will also be  forums, round tables, presentations and competitions.

Joint Stock Company "TEXTILEXPO" is a specialized exhibition and  consulting company, a member of the Russian Union of Exhibitions and  Fairs and the Global Association of the Exhibition Industry UFI. The  company's assets include the development and implementation of a  large-scale project on the formation of the national textile and  light industry market, the Russian Textile and Fashion Week, in  cooperation with partners. The main exhibition project - wholesale  fairs "TEXTILLEGPROM" in terms of the number of participants and the  closed exhibition space is the largest in Russia.

To note, the volume of industrial production in Armenia in the first  half of 2017 by the same period of the previous year increased by  12.4% (against growth of 8.9% a year earlier), making 760.4 billion  AMD ($ 1.5 billion). According to the National Statistical Service of  Armenia, high growth was recorded, including in the production of  textiles (by 27.5%). Earlier - on June 8 at a government meeting  Prime Minister Karen Karapetyan said that Armenia's light industry  needs to be granted additional benefits. In particular, according to  him, effective government assistance is needed to develop the  textile, clothing, leather and shoe industry and carpet industry.  "The government should seriously support enterprises that have a  serious potential for development of the whole sphere and creation of  new jobs," the prime minister said.