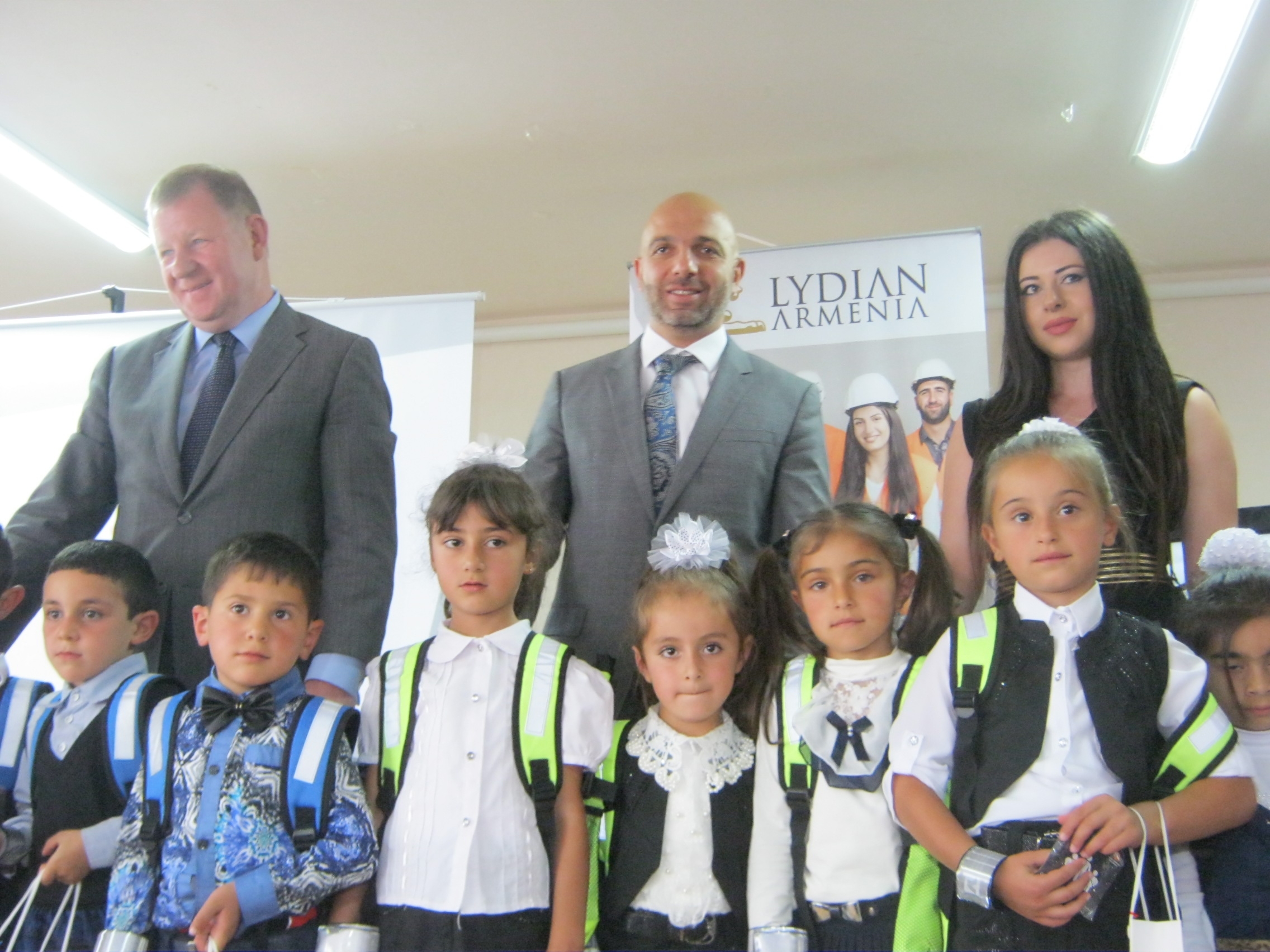 ArmInfo. For the second  consecutive year, Lydian Armenia jointly with the Lithuanian Embassy  in Armenia has been implementing a road safety program in the  communities adjacent to the Amulsar gold deposit. Thus, according to  the general director of Lydian Armeia Hayk Aloyan, the company  invested about 8 million drams for the implementation of a joint  program with the Lithuanian partners, which is becoming traditional.

He stated this on September 5 during a working visit to Gorayk, where  the schoolchildren received reflectors and school portfolios with  reflectors, which in most European countries is a mandatory  requirement. Initially, according to A. Aloyan, the idea of  increasing road safety for children was proposed by the Lithuanian  Embassy, and Lydian Armenia supported this initiative because the  company attaches particular importance to the safety of its  employees. "And now we want to convey our experience to the residents  of neighboring communities of Amulsar," he stressed.

The first year in the framework of cooperation with the Lithuanian  embassy, reflectors and school portfolios with reflectors, the  company transferred 600 pupils to 4 schools in Jermuk and villages  Kechut and Gndevaz (Jermuk region). This year, the beneficiaries of  the program were students from schools in the Gorayk and Saravan  communities, as well as 200 first-graders from Jermuk, Kechut and  Gndevaz. "The main goal for us first of all is to conduct  conversations with schoolchildren about the rules of the road, and  the delivery of portfolios and reflectors is a traditional event that  serves schoolchildren as additional means to improve road safety," he  said. For his part, Ambassador Extraordinary and Plenipotentiary of  Lithuania to Armenia Erikas Petrikas noted that the program is being  implemented with the support of the Lithuanian Highway Directorate.  The ambassador informed that since 1991 to this day, thanks to the  launch of the program on the mandatory use of reflectors, the number  of accidents in Lithuania has decreased by 10 times- from 1200 to  120. According to him, the introduction of European experience in  Armenian schools will reduce the number of accidents and contribute  to the education of students in the rules of the road. E.  Petrikas  explained that when using reflectors children in the evening on the  roads become visible at a distance of 150 meters, while without the  use of reflectors - this distance is reduced to 50 meters. At the  same time, as part of the joint event, Lydian Armenia specialist Eric  Stepanyan presented the students with a presentation on safe behavior  on roads and in transport, and Lithuanian road safety experts who  arrived in Armenia at the invitation of the embassy conducted special  lessons aimed at improving the safety of the roadmovement.

To remind, earlier LA company also replaced non-functioning traffic  lights in 2 places of Jermuk - at entrance and near the school  (digital and flashing), together with the installation of  missingtraffic signs regulating traffic.

To recall, Lydian Armenia is a subsidiary of the British Lydian  International, whose shareholders are also large international  institutional investors from the United States, Great Britain, a  number of European countries, including IFC and EBRD. The Amulsar  project is the largest industrial project in Armenia today to develop  the Amulsar gold deposit with a total value of $ 370 million. In  August 2016, a project for the construction and development of the  field was launched. Preliminary work has been carried out since 2006.   The life of the Amulsar field will be 10 years and 4 months, an  annual average of 200,000 ounces of gold (about 10 million tons of  ore) will be produced. The company's shares are quoted on the Toronto  Stock Exchange. Amulsar deposit is the second largest in Armenia.