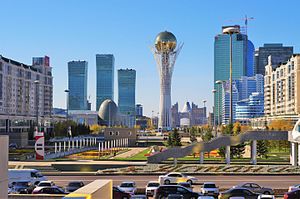 ArmInfo. The seventh meeting of the Armenian-Kazakh intergovernmental commission on trade and economic cooperation was held on September 27 in Yerevan under the chairmanship of the Vice Minister for Investments and Development of the Republic of Kazakhstan Erlan Khairov and RA Deputy Foreign Minister Robert Harutyunyan.

The parties agreed to develop trade and economic relations through the exchange of information on export- oriented products and export markets of both countries. For its part, the Kazakh delegation expressed readiness to hold a trade mission of commodity producers in the Republic of Armenia in 2018.

E. Khairov noted that by the results of 2016 the foreign trade turnover between Kazakhstan and Armenia increased by 8%, and in 7 months of 2017 the trade turnover increased by 38%. "That is, we see that the trend has developed good, but it must be supported. And this is the task of the Commission, which we are ready to solve," he stressed.

For his part, Kazakhstan's Ambassador to Armenia Timur Urazaev noted: "The growth of mutual trade already shows that there is a good basis and potential for further progress in this direction." At the same time, T. Urazaev stressed the importance of cooperation between the interregional business of Armenia and Kazakhstan, without concentrating the interaction only between the central bodies.

During the meeting, a protocol was signed on further steps in the development of cooperation, particularly in the trade and economic sphere, in the field of geology and subsoil use, agriculture, health, education and science, culture, tourism, transport (road and rail), and migration.

In conclusion, the members of the Commission agreed to hold a regular meeting in 2018 in the city of Astana.

According to the National Statistical Service of Armenia, the foreign trade turnover between Armenia and Kazakhstan in January-July 2017 increased by 36.1% to $ 2.6 million, with export growth of 16.8% to $ 2 million and imports - 2.7 times to $ 663.9 thousand.