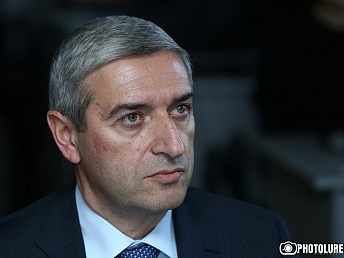 ArmInfo. Vahan Martirosyan,  Minister of Transport, Communications and Information Technologies of  Armenia, on October 5 received representatives of three French  engineering companies who arrived in Yerevan to participate in the  Armenian-French business forum. The Minister expressed readiness to  promote initiatives aimed at developing cooperation between the two  countries' engineering spheres.

According to the press service of Transport Ministry, guests  presented directions and specialization of their activities,  implemented projects.

A representative of the company specializing in the construction of  metal bridges, improvement of infrastructures, discussed the  possibility of introducing their experience in Armenia.

Minister Martirosyan presented the course of the program of  construction of the transport corridor "North- South". The parties  discussed the prospects for cooperation.

According to the National Statistical Service of Armenia, the mutual  trade turnover between Armenia and France for January-July of 2017  amounted to $ 37.3 million with an annual decline of 30.2%. In  particular, exports fell by 1.1% to $ 1.9, while imports increased by  32.5% to 35.3 million.