At the exit meeting in Gyumri, Converse Bank Council discussed the concept of the region`s development through investment programs 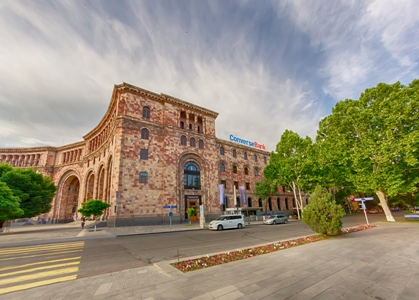 ArmInfo. At the outgoing meeting in Gyumri, the Converse Bank Council discussed the concept of the region's development - prospects for Gyumri branches' activities and assistance to regional entrepreneurs through investment programs. As the press service of the Bank told ArmInfo, this meeting was held on October 6.

"Outreach meetings of the Bank's Council have already become a tradition.This kind of events and discussions make it possible to get acquainted with the demands of the residents of a particular region, the development potential and the prospect of financing various sectors of the economy on the spot. The bank is currently discussing not only the possibility of participating in the development programs of Gyumri, but also development and introduction of new financial products for the residents of the region, "the message of Converse Bank notes.

According to the source, in Gyumri Converse Bank involved 3 branches, offering residents and entrepreneurs a wide range of services and credit products. One of the branches of the Bank operates at the airport of Shirak, the program of modernization of which the International Airports Company Armenia intends to realize.

The Council members and guests visited the Artic region, where Converse Bank finances the construction of greenhouses according to European standards.

The message of Converse Bank also notes that visits and visiting sessions of the Bank's Council will be regular. In the near future such discussions will be held with the departure to other regions.

In total, the Converse Bank branch network covers 34 units, out of which 20 are located in the regions of Armenia.  To note, Converse Bank has been operating in the Armenian market since September 1996. As of July 1, 2017, the Bank's shareholders are Advanced Global Investments LLc (headed by Eduardo Ernekian) - 80.94%, HayPost Trust Management B.V. - 14.06%, the Cathedral of the Mother See of Etchmiadzin - 5%.  A well-known Argentinean businessman of Armenian origin, Eduardo Ernekian, being the holder of a number of large assets (the syndicate "The Ernekian Group", "America TV", 4 radio stations and the Argentine financial magazine "El Cronista", the operator of the airports "Aeropuertos Argentina"), also owns American International Airports, which carries out the concession management of Zvartnots airport in Yerevan. Ernekian is implementing large projects in Armenia.