With the assistance of ACBA-Credit Agricole Bank in Lori region, the "Harvest Festival" was held 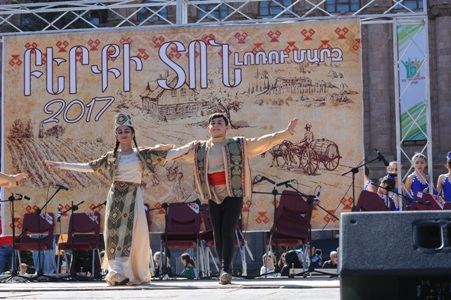 ArmInfo. Within  the assistance of ACBA-Credit Agricole Bank in the city of Vanadzor, Lori region, the traditional "Harvest Festival" took place, in which the inhabitants of the region presented the fruits of the harvest collected throughout the year. This is stated in the official message of the bank.

According to the source, that at the "Harvest Festival", the Bank presented its pavilion, demonstrating the best solutions developed specifically for farmers.  Videos can be viewed on the following

According to the financial rating of the Armenian Banks, as of July 1, 2017, prepared by IA ArmInfo, ACBA- Credit Agricole Bank is the permanent leader in the agricultural credit market - 83.5 billion drams or over 40% of the loan portfolio of the bank, and in the total agricultural credits of the banking system the share of ACBA-Credit Agricole reaches 52%. The scope of SMEs is invested 41.5 billion drams or more than 20% of the bank's loan portfolio. In the first half of 2017, the Bank increased the volume of agricultural credits by 6%, and the volume of SME lending - by 18.8%. ACBA-Credit Agricole is included in TOP-5 (58 subdivisions) in terms of coverage of the branch network, and the second position (42 subdivisions) is retained by the number of regional branches. On the main balance sheet indicators, the Bank holds positions in the TOP-5. The total capital of the bank at that date was 58.7 billion drams (3rd position), assets - 317.7 billion (4th position), loan portfolio - 211.8 billion (5th position), total liabilities - 259 billion (5th position). I half-year of 2017, ACBA-Credit Agricole Bank completed with a net profit of 2.7 billion drams (4th position), having increased 2.6 times in its annual cut. (The calculated exchange rate of the dram as of June 30, 2012 amounted to 480.47 drams / $ 1).

It should be noted that "ACBA-Credit Agricole Bank" CJSC has been operating in Armenia since 1995. Since September 2006, the largest European bank group Credit Agricole is the majority shareholder of the bank  S.A.  with a 15.56% equity interest, followed by the participation of SJSC "Sacam International" (member of Credit Agricole S.A) - 12.44%, along with which there are 10 regional Unions of Peasant Mutual Assistance.