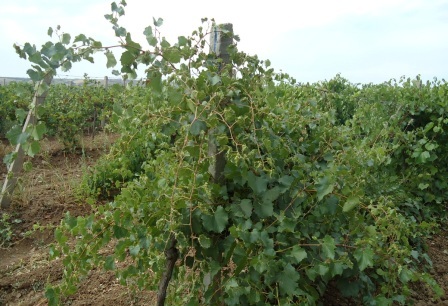 ArmInfo. The Armenian Ministry  of Agriculture, with the support of the Food and Agriculture  Organization of the United Nations (FAO), plans to implement a  program in which seedlings of grapes resistant to phylloxera will be  planted. This was reported by the Minister of Agriculture of Armenia  Ignaty Arakelyan on October 11 at a meeting with journalists, summing  up the results of the activity of the department headed by him in  2016-2017.

The minister did not announce the program budget, but noted that  within the program, it will be possible to preserve both varieties of  grapes endemic for Armenia, and imported ones.

In terms of development of winemaking, the Minister expressed  satisfaction with the work of the Wine- growing and Winemaking  Foundation of the Republic of Armenia, created by the government  decision of June 23, 2016. The Fund's activities will be aimed at  solving problems in connection with the issues of improving the  quality of produced wine products in order to ensure its  competitiveness in the domestic and foreign markets. According to the  Minister, thanks to the activities of the Foundation, numerous events  were held, participation of local companies in specialized  international exhibitions was provided, where Armenian winemakers had  already received numerous awards. "Already today we see an increase  in the volume of wine sales, both in terms of exports and domestic  sales," Arakelyan said.

Earlier, on August 18, at a meeting with journalists, the chairman of  the Armenian National Wine Center Avag Harutyunyan stated that part  of the Ararat valley and foothills had been declared an infected  phylloxera. According to Harutyunyan, it is expected that because of  this, a massive planting of European varieties of vineyards and the  same mass destruction of contaminated vineyards will begin.

However, I think that there is much more, "said Avag Harutyunyan,  chairman of the Armenian National Wine Center. At the same time, the  expert expressed much greater concern not only about the size of the  already infected territories, but also about the fact that the  phylloxera continues to spread at a progressive pace.

In addition, during the Soviet era, the importation of new varieties  of grapes to Ararat valley was banned, and after the collapse of the  Union, the Armenian authorities did not take any action to control or  prevent the spread of the disease. According to the National  Statistical Service of Armenia, the volume of cognac produced in  Armenia in January-August 2017 increased by 60.7% compared to the  same period in 2017, amounting to 18.4 million liters. During the  reporting period, wine production increased by 35.2%, amounting to  5.1 million liters, while vodka production decreased by 31.9% and  amounted to 3.5 million liters. Champagne for the reported period was  produced for 305 thousand liters against 253.9 thousand liters in  January-August 2016, and beer - 15.7 million liters (an increase of  9.6%). At the same time, the production of whiskey for the reporting  period amounted to 849.7 thousand liters (a decline of 17%).   Production of non-alcoholic beverages amounted to 60.7 million  liters, which is 31.4% more than in January-August 2016. According to  the report of the Customs Service of Armenia, in 2016 Armenia  exported 1.8 million liters of wine with an annual growth of 27.7%,  with the customs value increasing by 43.6% to $ 5.9 million. In the  first half of the year, wine exports increased by 61% to 1271.9  thousand liters, with the increase in customs value by 84.3% to $  4.7mn.