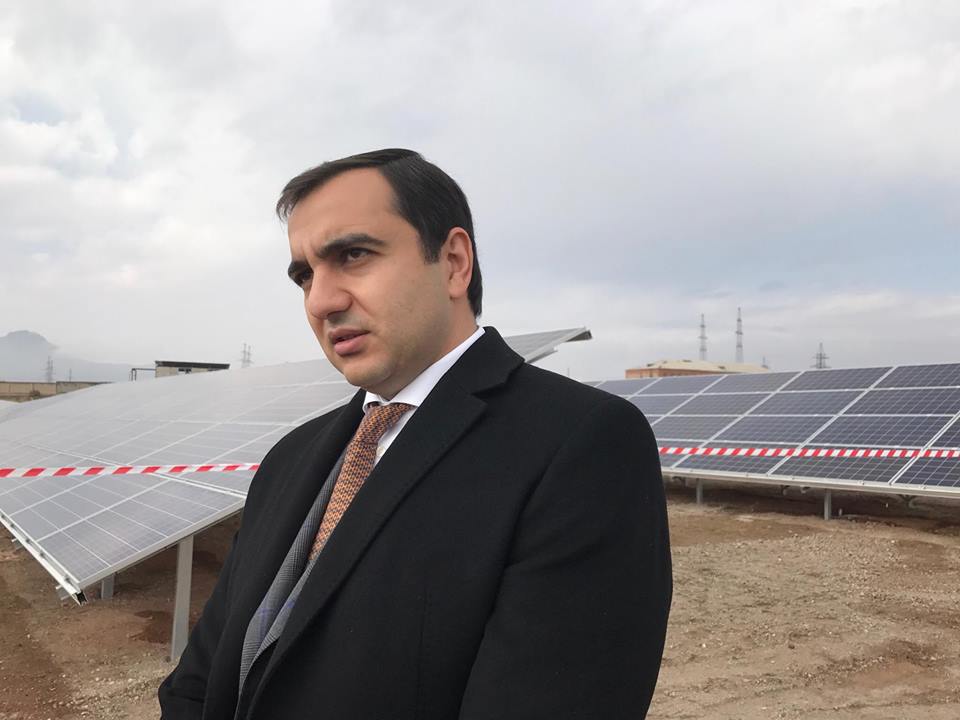 ArmInfo. As the solar energy  industry of Armenia develops, a more accurate estimate will be given  regarding the ability of the republic's energy system to receive  electricity from the solar energy facilities of the country.

"It is  possible that in the future, in the conditions of more active  development of regional trade, Armenia's energy system will be able  to take not 70 MW of solar energy, as the head of the Energy Ministry  (Ashot Manukyan, editor) stated earlier, but more," said the deputy  minister of energy infrastructures and natural resources Armenia Hayk  Harutyunyan on November 7 during the launch of the Talin-1 solar  power plant, located in the city of the same name, with a nominal  capacity of 1 MW.

According to the representative of the Ministry of Energy, at this  stage, surplus energy through the North- South energy corridor is  sent to Iran and Russia. "We have established a mutual flow of  electricity between the countries and today the surplus power systems  are already exported," he said. As Harutyunyan said, following the  construction of new lines and increasing the capacity of the power  line, Armenia will be able to "digest" much more solar electricity,  balancing with the help of regional flows.

At the same time, as the Deputy Minister stressed, solar energy is  one of the most promising areas in Armenia, as one of the easiest in  terms of construction - it takes several weeks to build a bottom  solar station. Meanwhile, the implementation of projects in the field  of wind energy requires from one to two years only to study the  terrain. The deputy minister recalled that a month earlier, at the  end of September, the first industrial power plant in Tsakhkadzor  with a nominal capacity of 450 kW was put into operation.  The 1 MW  power plant launched today, the second one and today the largest one.  In the process of construction of another 9 similar power generation  stations. The Ministry of Energy plans to launch them in 2018.

Now in the active phase there is a competitive process for the  construction of a solar power plant Masrik-1 with an industrial  capacity of 55 MW. The prequalification stage of the international  tender was overcome by 10 companies and one consortium. "The ministry  will give its preference to that company or to a consortium that will  present the smallest and most competitive price offer," said Hayk  Harutyunyan.

Today in Armenia's Talin, Aragatsotn region on November 7, the  largest in Armenia solar power plant with a capacity of 1 MW. The  project was implemented thanks to a group of investors (Eduard  Marutyan, Araik Karapetyan, Zaven Sargsyan and Hayk Chobanyan) and  co-financed under the "Renewable Energy Promotion" program by the  German bank KfW jointly with the German-Armenian Fund (GAF) through  "Conversbank" CJSC. "After 5-6 years, while maintaining the current  tariffs, the total production of solar power plants in the country  will approach 1 GW per year," said Hayk Chobanyan, general director  of Arpi Solar Company, the plant construction contractor.

According to the investment program approved by the government of the  country, it is planned to build solar stations in Armenia at 6 sites  with a total installed capacity of up to 110 MW. At the first stage,  a site near the "Masrik" community was chosen, where a solar station  with a capacity of 55 MW will be built.  The total cost of the  program for the construction of solar power plants in Armenia is $  129 million. Of the six surveyed regions, the Spanish consulting  company Aries Engineering has already submitted feasibility studies.  They relate to the localities of "Masrik" in Gegharkunik region and  "Dashtadem" in Aragatsotn region, studies on the remaining four  localities continue. One of the main conditions of the contest will  be the tariff offered by investors.

The climate investment fund for the development of alternative energy  provided Armenia $ 28 million, of which $ 2 million - a grant and $  26 million - a loan. The loan terms are soft - 0.25% per annum with a  maturity of 40 years and a grace period for payments in the first 20  years. Grant to study the localities, develop a feasibility study for  the project, calculated at a station of 100-120 MW capacity. The  government plans to reduce energy consumption by 38% by 2020 and,  accordingly, reduce energy costs. In Armenia, all conditions have  been created for the installation of solar power plants - no licenses  are required and the whole process is exempt from taxes. All the  conditions for investing in this sphere have been created.