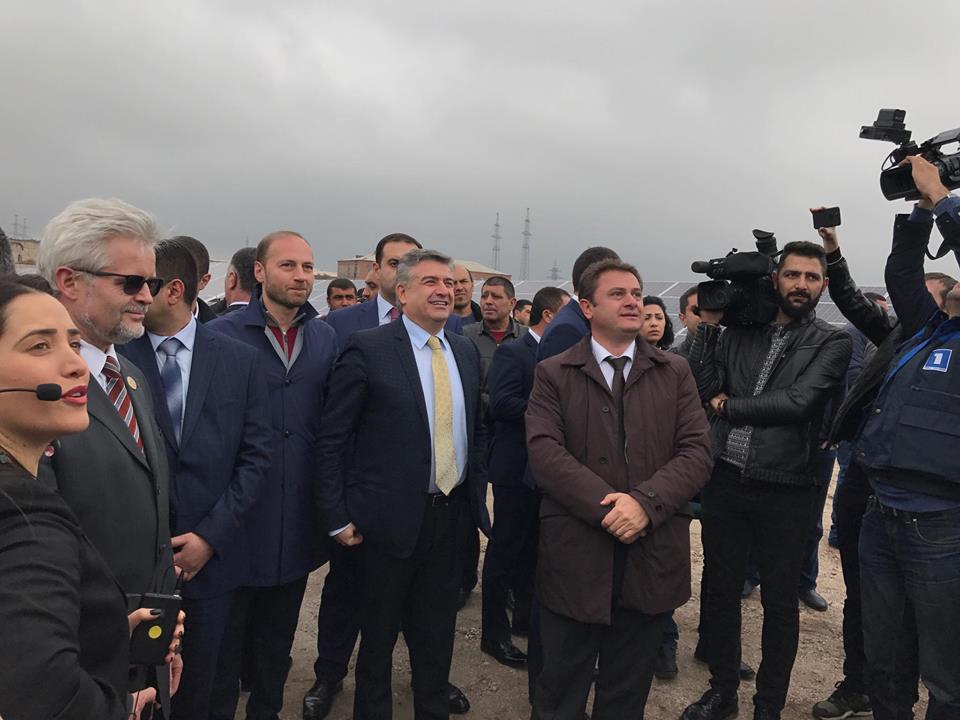 ArmInfo. The energy sector is  one of the dynamically developing areas of the Armenian economy. The  Prime Minister Karen Karapetyan stated this on November 7 in the  Armenian Talin, Aragatsotn region, where the largest solar power  plant in Armenia with a capacity of 1 MW was launched.

According to the prime minister, the government attaches great  importance to the diversification of this energy sector, promoting  the implementation of various programs. In turn, as the Secretary  General of the International Energy Charter Urban Rusnak noted, the  opening of this station indicates a good investment climate that was  created in Armenia in recent years. "According to our research, an  institutional and regional base for working with international  investors has been created in Armenia," Rusnak said.In his words,  work is being done jointly with the Armenian government to ensure the  continuity of the process to improve the investment climate.  maintenance of a proper investment climate has already been formed,  the matter is for the appropriate coordination of work both within  state structures and with international investors.

"According to our estimates, Armenia is now capable of protecting  investment. Meanwhile, it is more important to preserve these good  conditions, since such projects are designed for decades, "Rusnak  said.  This is the launch of the largest solar power plant in Armenia  in the city of Talin, Aragatsotna.The project was implemented thanks  to a group of investors (Eduard Marutyan, Araik Karapetyan , Zaven  Sargsyan and Hayk Chobanyan) and co-financed in the framework of the  program "Renewable energy assistance" by the German bank KfW jointly  with the German-Armenian Fund (GAF) through "Conversebank" CJSC.  The  volume of investments invested in the project, composition $ 1  million The power plant covers an area of 1,800 square meters, and  its nominal capacity reaches 1 MW, which is enough to provide  electricity to 400 families, which in turn will meet the needs of  almost half the population of the city of Talin. 3700 polycrystalline  solar cells that convert solar radiation into direct current  electricity.

After that, it enters 14 inverters, which convert it into alternating  current. With the help of a transformer substation, the voltage is  brought to the level necessary for transmission of electricity to a  single network.  According to the investment program approved by the  government of the country, it is planned to build solar stations in  Armenia at 6 sites with a total installed capacity of up to 110 MW.  At the first stage, a site near the "Masrik" community was chosen,  where a solar station with a capacity of 55 MW will be built.  The  total cost of the program for the construction of solar power plants  in Armenia is $ 129 million. Of the six surveyed areas, two Spanish  consulting company Aries Engineering has already submitted  feasibility studies.

They relate to the localities of "Masrik" in Gegharkunik region and  "Dashtadem" in Aragatsotn region, studies on the remaining four  localities continue. One of the main conditions of the contest will  be the tariff offered by investors. The advantage will be the company  that offers the minimum tariff. The climate investment fund for the  development of alternative energy provided Armenia $ 28 million, of  which $ 2 million - a grant and $ 26 million - a loan. The loan terms  are soft - 0.25% per annum with a maturity of 40 years and a grace  period for payments in the first 20 years. Grant to study the  localities, develop a feasibility study for the project, calculated  at a station of 100-120 MW capacity.