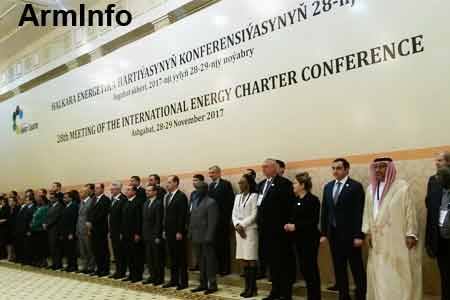 ArmInfo. The Energy Charter  plays an important role in energy efficiency efforts. Deputy Minister  of Energy Infrastructures and Natural Resources of Armenia Hayk  Harutyunyan stated this during his speech at the 28th session of the  Energy Charter Conference in Ashgabat, touching the topic "Mobilizing  Resources for Sustainable Energy Future and Diversification of  Transport Routes".

At the same time, the Armenian Deputy Minister noted that during the  event there was a lot of time spent discussing transit issues because  they care about everyone, but not enough time was spent to discuss  investment protection issues. "In order to realize the goals set out  in the Paris Agreement, we need to spend about 1 trillion USD until  2020. Of course, we are not far from this goal, we are approaching  the end of 2017 and the figures for this year are not yet known but  they are three times less than the goal that we were supposed to  achieve. "All of us must increase our efforts," said Harutyunyan,  noting that during his speeches, all touched upon issues such as  national security, energy security, international security, but not  enough but talked about such topical issues as climate change,  emissions of greenhouse gases, carbon dioxide into the atmosphere.  Meanwhile, this is one of the direct responsibilities of the Energy  Charter.

According to him, the Organization must find solutions to these  issues. "This is our policy: creating favorable conditions for  investment, reducing risks for investments, solutions must be found  that, in turn, lead to new investments, including in the field of  renewable energy. climate, "- said Harutyunyan.

Speaking about natural gas, the Deputy Minister of Energy noted that  natural gas plays an important role, since this implies a primary  energy source, a source for generation of electricity, and, after  all, it is a source of energy that resonates well with renewable  sources.

Harutyunyan agreed with the view that more time is needed to ensure  that the principles of transit are uniform and unified. "Too much  politics is mixed in transit, there should be less policy, and more  need to talk about access to energy, to clean energy," he said.

Speaking about the past year, the Deputy Minister noted that the  Organization has managed to do a lot for a rather small budget, and  this, in particular, thanks to the Turkmen chairmanship in the  Charter, which played an important role in supporting both financial  and political support. According to him, thanks to these efforts, it  was possible to achieve such results.

Chairman of the Energy Charter Conference, Deputy Chairman of the  Cabinet of Ministers of Turkmenistan Maksat Babayev stressed that  Turkmenistan has made a worthy contribution to the development of the  energy sector and is taking an active part in resolving issues in  this area, including at the international site. According to him, the  main principles of the Energy Charter practically fully correspond to  the position of Turkey in this sector, including the issue of energy  security.