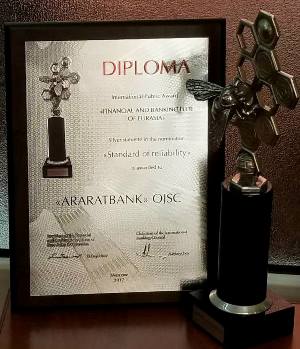 ArmInfo. ARARATBANK became a laureate of the award "Financial and Banking Elite of Eurasia" in the nomination "Reliability Standard". As the press service of the Bank told ArmInfo, the winners were awarded during the IV Moscow International Financial and Economic Forum, which was held on November 30 and December 1. At the solemn ceremony of awarding the "Financial and Banking Elite of Eurasia" prize, held in Moscow on November 30, the award was presented to the Chairman of the Board of ARARATBANK Ashot Osipian.

The award in the field of finance is an authoritative industry award, which testifies to the professional recognition of laureates in the sphere of banking, insurance, investment business, asset management, leasing, factoring, audit and consulting services.

157 participants from 14 countries took part in the IV Moscow International Financial and Economic Forum. They are representatives of such spheres as industry, agricultural sector, high technologies, science, financial and banking sector, public administration, as well as top managers of leading investment companies from Europe and Asia.

According to the Financial Rating of Armenian Banks, as of October 1, 2017, prepared by ArmInfo News Agency , ARARATBANK increased its loan portfolio by 71.5% to 120.1 billion AMD or $ 251 million (59.4% of the bank's assets). As a result, the assets of ARARATBANK grew during the reporting period by 47.1% to 202.3 billion AMD or $ 423 million. The total capital grew by 45.4% year-on-year to 35 billion AMD due to replenishment of the charter capital by 2 times to 16.8 billion AMD (through the issue of shares - in November 2016 and the merger with him of the Armenian Development Bank - in December of the same year). Total liabilities of the bank increased by 47.5% in the year to 167.3 billion AMD or $ 349.6 million, of which 55.4% accounted for term deposits and demand deposits (with an annual growth of 81.1%) and 37 , 7% - on funds raised from international financial organizations (with annual growth of 31%). 9 months of 2017, ARARATBANK completed with a net profit of 1.7 billion AMD, ensuring the annual growth of this indicator by 2.4 times. OJSC "ARARATBANK" has been operating since November 2005. The majority shareholders of ARARATBANK on October 1, 2017. perform one of the largest oil traders in Armenia - the company "Flash" - 72.73%, Barsegh Beglaryan (well-known entrepreneur, head of the "Flash") - 18,33% and the Rural Impulse Fund II (part of the structure of the Belgian Incofin Investment Management - Incofin IM) - 8.58%. ARARATBANK takes the third position in the total number of branches, which number 61, and this position is held by the number of regional branches (30), and according to the number of capital (29) the championship is fixed.