T. Valovaya: Armenia has done more than possible for the practical implementation of the agreement of the Eurasian Economic Union with Iran on the free trade zone 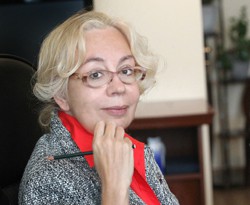 Earlier, RA President Serzh Sargsyan stated that Iran and the EAEU will sign an agreement on the establishment of a free trade zone in a few months.

The delegation of the EAEU and Iran, in June 2017, completed work on the text of the interim agreement leading to the formation of the FTZ. At this stage, the sides coordinate the tariff policy.

Earlier ArmInfo referring to the chairman of the collegium of the EEC Tigran Sargsyan informed about the possibility of concluding an interim agreement in 2017.

The establishment of a FTZ between the EAEU and Iran is of great importance for the development of the Syunik region of Armenia. This will allow Armenia to become a link between Tehran and the 180 millionth market of the EAEU. This bridge may be used by representatives of European business. The creation of the FTZ requires $ 32 million. The RA Government approved the program for the creation of the free economic zone "Meghri" on the border with Iran on August 3, 2017.