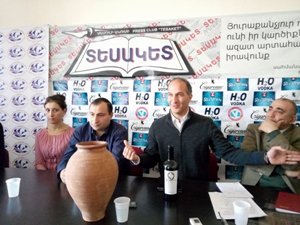 ArmInfo. JSC "Karas Vines" (Tierras De Armenia) requires the use of the word "karas" (jug) on the labels of other wine producers. This was stated by Zorik Gharibyan, an Italian businessman of Armenian origin, during the press conference on December 15, the founder of ZAO Saki & Sans, the founder of the Zorah winery.

He explained that "Karas Vines" CJSC is currently suing the RA Ministry of Economic Development and Investments in order to get the Armenian wines that use the word "Karas" on their labels to be removed from registration. In this context, Z. Gharibyan mentioned the accusation of "Karas Vines" CJSC, which was addressed to certain winemakers: "Using the word karas on the etiquettes of other manufacturers introduces the consumer into confusion."

The court of first instance, according to the winemaker, lost. "The judge took no particular interest in deciding that the word" Karas "on the label of Zorah karasi wines occupies its part, and, in comparison with the rest of the text, is too pronounced. Even with miserable doubts, I would never go into the courtroom, Z.  Gharibyan said, demonstrating to journalists his wine Zorah karasi.

The expert noted that he could solve this issue outside of Armenia, but does not appeal to international courts, so as not to spoil Armenia's rating in the international arena. "Otherwise, we will get the image of a country that is not serious about its culture, and we have used technology of wine production in carats for thousands of years," he stressed. In the world there is a tough marketing war around the wine issue, and in such conditions, Armenia can not lead an absurd war inside the country. Instead of solving the issue at the round table, we bring it to the legal field, Z. Gharibyan said. In particular, he added that the hearings in the second instance court were postponed due to the petition of the RA Ministry of Economic Development and Investments. "The government is concerned about this issue and I hope that certain steps on their part will still be taken to resolve the current conflict," he concluded.

Recall that in 2011, during the archaeological excavations in the cave Areni-1, the ruins of the world's oldest winery, whose age is about 6 thousand years, were also found, where "carps" (jugs) were also found, used for the production and storage of wine. Meanwhile, in 2012 the American edition of Bloomberg Businessweekly included Zorah Karasi wine in the top ten of the world's wines.