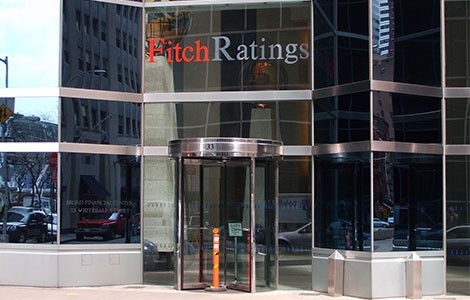 ArmInfo. The international rating agency Fitch Ratings has affirmed Armenia's long-term issuer default rating (IDR) in foreign and local currency at "B +", improving the outlook on the rating from "Stable" to "Positive". The rating report was published by Fitch on December 15.

According to the agency's analysts, after the shock of 2014-2015 the Armenian economy is being actively restored "due to structural improvement of exports, improvement of external demand, and also due to effective monetary policy.Key rating drivers were:  Medium The economy is experiencing a strong recovery following a large external shock in 2014-15, driven by a structural improvement in export performance, firmer external demand conditions and recovering remittances, and supported by a credible monetary policy framework.  Fitch has revised up its growth projection to 4.3% for 2017 from 3.4% previously, as GDP growth averaged 5.3% in 1Q-3Q. We expect growth to average 3.6% in 2018-2019 due to a still favourable environment for remittances and export growth.

Fitch's projections for the budget deficit and growth performance are consistent with stabilisation in government debt. We forecast debt to rise to 57.5% of GDP in 2017, slightly below the projected 58.6% 'B' median, peak in 2018 at 58.1% and gradually decline thereafter.  Armenia's government debt structure has a high level of concessional debt (66% of total debt), but 81% is foreign currency-denominated, exposing it to exchange rate volatility.

Armenia has a moderate current account deficit, which Fitch forecasts at 3% of GDP in 2017 and to average 3.4% in 2018-2019. Domestic demand-driven import growth will be balanced by export receipts underpinned by stable commodity prices, diversification to new markets and stabilisation of the Russian economy benefitting export and remittances growth. A moderate current account deficit mitigates external vulnerability arising from commodity dependence and the small size of the economy.  It will also lead to the stabilisation, and then gradual reduction, of the country's high net external debt at 44.8% of GDP by end-2017 versus 20% for the 'B' median.

Armenia's 'B+' IDRs also reflect the following key rating drivers:  Armenia is exposed to external shocks but has shown a capacity to absorb them, helped by a credible monetary policy framework. After exiting deflation in April, inflation remains low, and is expected to average 1% in 2017 before converging to the Central Bank of Armenia's (CBA) target of 4% in 2018-2019. The central bank has kept interest rates on hold since early 2017 and has stated its readiness to tighten policies if demand side pressures increase.

The banking system remains stable with strengthened capitalisation (capital adequacy ratio (CAR) 19.1% in October). Deposit and loan dollarisation have declined but remained high at 57% and 62%, respectively. The banking system's FX position is balanced and regulations are in place to prevent foreign-currency lending to non-foreign-currency generators. Non- performing loans (up to 270 days overdue) equalled 6.7% in October, down from a peak of 10% in March 2016.

International reserves are above USD2.1 billion (above four months of current external payments). Fitch estimates that Armenia's liquid assets as a share of short-term liabilities (at 125% in 2017) will remain below the 'B' category median. Exchange rate flexibility, reduced external imbalances and access to external financing reduce the risk of near-term balance- of- payment pressures. After completing its IMF EFF agreement this year, Fitch expects the authorities to seek continued engagement with the fund.  Armenia is in the process of modifying its fiscal rules. As government debt exceeded 50% of GDP in 2016, the previous fiscal rule required the government to target deficits lower than 3% of the previous three years' average GDP. This required an abrupt adjustment, which the government is unlikely to meet. New rules are likely to maintain the key 50% and 60% of GDP thresholds, while allowing a smoother fiscal adjustment path and favour capex over current expenditure. Armenia's fiscal credibility would also be strengthened by building a track record of meeting budgetary targets, as fiscal outturns in 2017 and 2018 will likely overshoot budgeted deficits, as in 2015 and 2016.

Improving the country's medium-term growth prospects is likely to require further progress in reforming the investment climate and increasing domestic savings, as total investment is low at 18.4% of GDP.

Armenia has structural strengths relative to peers in terms of higher income per capita and governance indicators. In April 2018, constitutional reforms will come into effect, with the Prime Minister becoming the Head of State and the President being elected indirectly by an electoral college/parliament. Fitch expects the general direction of economic policy to be unaffected.

Fatalities and military incidents between Nagorno-Karabakh and Azerbaijan have picked up in intensity and frequency since late 2016. Meetings at the presidential and ministerial level between Armenia and Azerbaijan under the auspices of the OSCE Minsk Group in 2H17 have yet to make visible progress in stabilising the conflict, let alone resolving the Nagorno- Karabakh issue. Escalation is a material risk.