Margvelashvili: Armenia`s membership in the EAEU and Georgia`s engagement with the EU did not weaken the Armenian-Georgian economic cooperation 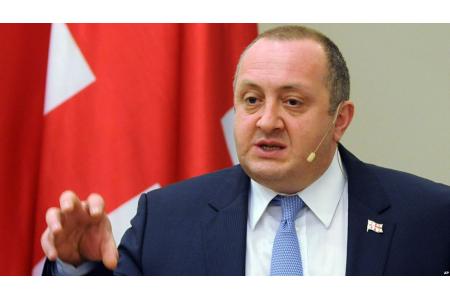 ArmInfo. "Despite the existing good neighborly relations, we always have the opportunity to take another step towards deepening our cooperation," Georgian President Georgi Margvelashvili said at a joint news conference with Armenian President Serzh Sargsyan, who is on a two-day official visit to Tbilisi.

As the press service of the Georgian leader told ArmInfo, Margvelashvili stressed the importance of Sargsyan's visit to Tbilisi, especially in the year of the 25th anniversary of the establishment of diplomatic relations between the two countries.

"At the meeting, we discussed the regional situation and agreed that all complex issues should be resolved through negotiations and within the framework of international norms, touched on promising projects that are aimed at stability in the region and economic development." Also discussed were the strategic membership of our countries: Armenia in the Eurasian Economic Union (EAEU) and Georgia in the EU Despite the signing of the Association Agreement with the EU and the availability of free trade with Europe, and the fact that Armenia is a member of the EAEU is not about weakened the Armenian-Georgian economic cooperation, on the contrary, we see that the freight turnover between our countries has increased, according to statistics, the flow of tourists has also increased, so I can say that the visit of the Armenian president to Georgia is another step forward, another attempt to make full use of the existing potential for the benefit of our peoples," Margvelashvili said.

Sargsyan added that during the meeting the issues of security and economic development of the South Caucasus were discussed. "In this context, it is very important that the delicate issues are balanced, and we are sure that the existing conflicts can be settled through peaceful negotiations and within the already agreed formats," Sargsyan said. At the same time, he stressed that Armenia is deeply interested in developing relations with fraternal Georgia.