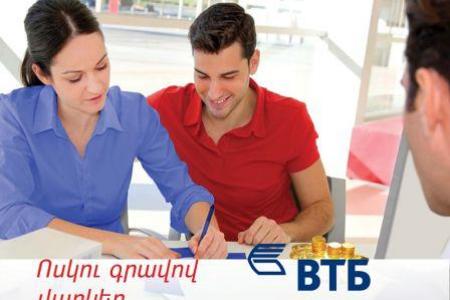 ArmInfo. On the eve of New Year's holidays, VTB Bank (Armenia) launches the latest in 2017. share in loans secured by gold, which will remain in force until January 31, 2018.

As the press service of the Bank told ArmInfo, within the framework of the campaign, customers will be able to issue loans secured by gold products on favorable terms.

In particular, the annual interest rate on AMD loans will be 2% and on dollar loans - 1%, the loan amount - up to 150% of the estimated value of the mortgage, the loan maturity - up to 3 months. A one-time commission for the issuance of a loan - up to 4% of the loan.

According to the source, customers can apply to any of the 65 branches of VTB Bank (Armenia) to issue loans secured by gold on beneficial terms, by presenting only an identity document. The loan is executed on the spot in a matter of minutes.  More detailed information on the terms and conditions of the promotion can be found in the branches of VTB Bank (Armenia), as well as by calling the Unified Information Service of the Bank at 87-87.

It should be noted that VTB Bank (Armenia) CJSC became a participant in the international financial group VTB in April 2004. At present, VTB Bank, the second largest bank in Russia, owns 100% of VTB Bank (Armenia). The Bank is traditionally one of the leaders of the banking system of the Republic of Armenia in terms of key indicators. VTB Bank (Armenia) retains leadership in the coverage of the branch network, which has 66 branches, of which 23 are located in the capital. In terms of the number of regional branches, the Bank also holds the first place - 43 units with presence in all areas.