Deputy Prime Minister of Singapore: Armenia can play an important role in terms of developing relations between the countries of the South Caucasus and the ASEAN member states 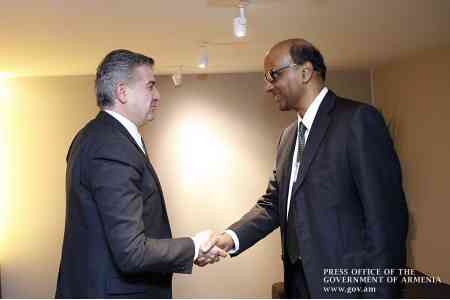 ArmInfo. Prime Minister of  Armenia Karen Karapetyan discussed prospects of development of  relations between the Republic of Armenia and the countries of the  Association of Southeast Asian Nations in the framework of the 48th  annual session of the World Economic Forum (WEF) in Davos,  Switzerland and the Deputy Prime Minister and Coordinator for Social  and Economic Development of Singapore Tarman Shanmugaratnam. East  Asia (The Association of Southeast Asian Nations, ASEAN).

As the press service of the Armenian government reports, at the  beginning of the conversation, Tarman Shanmugaratnam noted the  significant contribution of Armenians to the development of the  country, emphasizing the importance of the cultural heritage of the  Armenian people in Singapore.  According to him, Armenia can play an  important role in the development of relations between the countries  of the South Caucasus and the ASEAN countries. "It is very important  that there are no problems between us, and we are determined to  deepen bilateral cooperation," the Singapore Deputy Prime Minister  noted.

Karen Karapetyan, in turn, stressed that Singapore's development path  is a good example for Armenia. He pointed out a number of industries  that may be of interest to Singaporean business, in particular,  winemaking, organic agriculture, educational sphere, information  technology. The Prime Minister also noted the importance of  implementing educational exchange programs. "We are interested in  stimulating negotiations between the Eurasian Economic Union and the  Singapore Free Trade Zone, which can contribute to the growth of  trade and investment and the implementation of mutually beneficial  programs," the Armenian government head said. Both sides stressed the  importance of eliminating double taxation between Armenia and  Singapore, and it was noted with satisfaction that the development of  the relevant agreement is at the final stage. Prime Minister Karen  Karapetyan invited his Singaporean colleague to visit Armenia and  Tarman Shanmugaratnam accepted the invitation gratefully.