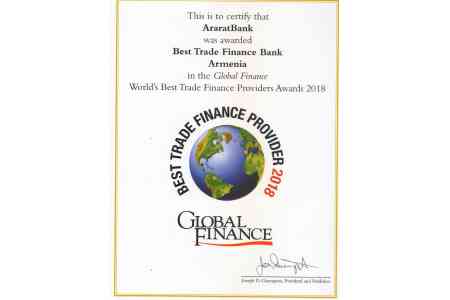 ArmInfo. The international  authoritative publication Global Finance recognizes ARARATBANK as the  best bank in Armenia for trade financing for the third consecutive  year. The press service of the Bank told ArmInfo that the award was  given to ARARATBANK in view of such criteria as innovative  technologies introduced in the bank, the volumes, accuracy and speed  of the operations performed, geographical coverage of transactions  and high level of customer service.

The names of the winning banks on a global scale in different  nominations "Global Finance" was announced on January 17 in London at  the annual meeting of the Banking Association of Finance and Trade  (BAFT). Editors and analysts of Global Finance, businessmen and  independent experts carried out the selection of winners from 94  countries.

It is worth mentioning that for the last seven years ARARATBANK has  been repeatedly awarded the title of "Best Bank of Armenia for Trade  Finance" by two international authoritative financial institutions -  the German Commerzbank AG and the European Bank for Reconstruction  and Development (EBRD).

The monthly edition of "Global Finance" has been published since  1987. The magazine has over 50,000 subscribers in 180 countries. The  target audience of the publication are the leaders and  representatives of the world's largest private and public financial  structures. The experts of the publication analyze the important  financial indicators of more than 192 countries.

"ARARATBANK" OJSC has been operating since November 2005. The  majority shareholders of ARARATBANK on October 1, 2017 one of the  largest oil traders in Armenia - Flush company - 72.73%, Barsegh  Beglaryan (famous entrepreneur, the head of Flash) - 18.33% and Rural  Impulse Fund II (part of the Belgian Incofin Investment Management -  Incofin IM) - 8.58%.