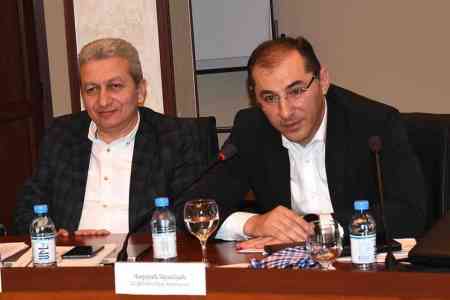 ArmInfo. "For everyone, it should be obvious that raising pensions in Armenia is inevitable," Finance Minister Vardan Aramyan said at a meeting with journalists. According to him, every year when forming the budget, the Cabinet discusses the possibility of raising social budget items, but will resort to this only if it is confident in the potential for stable economic growth of the country.

There was a time, reminded Aramyan, when the financial authorities raised pensions and allowances.  However, as soon as financial transfers to the country were reduced in the form of transfers, the government faced the need to seek funds for payments. "If economic growth in the country is not conditioned by the growth rates of production, then there is no need to talk about economic growth and stability of development," he said. This, as Aramyan noted, can also be achieved by increasing capital expenditures, in the direction of which the economy is moving Armenia. According to Vardan Aramyan, if the economy does not generate revenues and the desired level of tax collection is not fixed, Armenia will not manage to increase pensions and benefits for a long time.

At the same time, as First Deputy Minister of Finance Atom Janjughazyan noted, it is risky to raise pensions at this stage. "It would be adventurism to raise pensions without having a strong economic basis and reliable sources of financing," the deputy minister said, noting that he would not like to return to the experience of those years when on paper figures were raised, but the authorities did not have the resources for appropriate payments. "Currently, we are working hard to avoid the recurrence of this situation," he concluded.

The growth of salaries and pensions by the state budget of Armenia for 2018 is not provided. The authorities say that in the next two years it is not worth expecting an increase in pensions. Instead, it is planned to increase the capital expenditure - 175 billion AMD instead of last year's 98.6 billion.