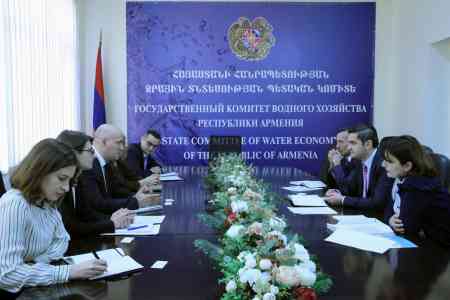 ArmInfo. The European Bank  for Reconstruction and Development (EBRD) has provided loan funds to  implement two major programs to improve water supply in Yerevan and  the regions of Armenia. This was stated during the meeting of the  President The State Committee for Water Resources of the Republic of  Armenia Arsen Harutyunyan and the newly appointed director of the  Yerevan office of the EBRD Dmitry Gvindadze.

According to the press service of the State Committee, in the  framework of the investment program, the total cost of which is 80  million euros - the EBRD's loan participation will amount to 30  million euros. This program will be implemented in 126 most needy  communities in 9 regions of Armenia, within the framework of which  water supply, drainage networks, reconstruction and modernization of  wastewater treatment facilities are envisaged.

According to the source, the second program is aimed at improving  water supply in Yerevan and provides for restoration of the water  supply network, including replacement of new water pipes and pumps,  individual connections and installation of water meters (water  meters). The total cost of the program is estimated at $ 21 million,  the EBRD's share is $ 7 million.

Harutyunyan noted that with the assistance of the Bank, a number of  programs were implemented in Armenia, of which two have already been  completed. According to him, thanks to the implementation of one of  them, the water supply system in Tavush, Lori, Shirak, Kotayk, Syunik  and Vayots Dzor provinces was improved, and sewage treatment plants  in Tavush and Vayots Dzor regions are to be built. "This three- year  program is an indicator of the effectiveness of cooperation between  us," he stressed.

In turn,  Gvindadze noted that he was pleased with the results of the  implemented programs, and I am glad that I took the post in Yerevan,  because I know the region. "I believe that the implementation of the  current programs will make tangible changes in Armenia," he  concluded.

EBRD is an institutional investor in Armenia. Since the launch of the  EBRD in Armenia, in particular since 1992, over 1.13 billion euros  have been invested in the implementation of 157 programs in the  financial, corporate, infrastructure, and energy sectors. Moreover,  88% of these investments were directed to the development of private  entrepreneurship.