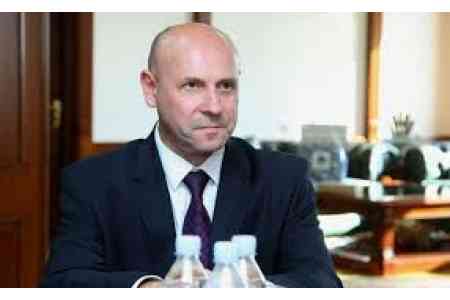 ArmInfo. Minister of Transport, Communications Information Technologies of Armenia Vahan Martirosyan and the Ambassador of Belarus in RA Igor Nazaruk discussed the development of transport cooperation between the two countries.

In particular, according to the press service of the Armenian Transport Ministry, during the meeting, the sides touched upon the mechanisms for the implementation of interstate passenger and freight traffic, the expansion of transport cooperation, and the activation of multimodal transport. The interlocutors also discussed the issues of direct and transit flights with Belarus.

Vahan Martirosyan and Igor Nazaruk appealed to the amendments to the intergovernmental agreement on international road transport between Armenia and Belarus. The head of the Ministry of Transport informed the Belarusian ambassador that the document at this stage was submitted for consideration by the legislature and will soon be ratified.  The Minister presented to the Ambassador of Belarus a program for the implementation of a unified transport network in Armenia. Igor Nazaruk, in turn, noted that a unified transport system is already operating in Belarus. Touching upon the expansion of cooperation in the field of transport, the ambassador told the Minister of Transport about the qualitative and technical features of buses, including electric vehicles of Belarusian production. He suggested that the Armenian minister consider the possibility of using Belarusian buses in organizing intercommunity passenger transportation in Armenia.  In this context, an agreement was reached in the near future to organize a meeting with Belarusian producers and representatives of companies that developed a unified transport system in Belarus.