Expert: The key task for Armenia is to achieve a ratio of exports to GDP of 30% 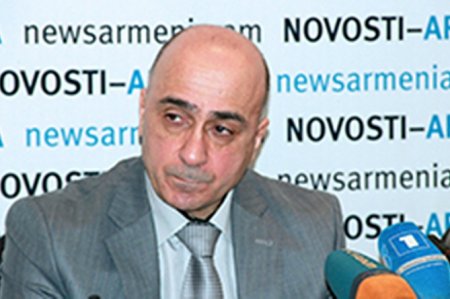 ArmInfo.  The key task for  Armenia in this situation is to achieve the export-GDP ratio of 30%,  in which finished products should prevail. This opinion was expressed  by the doctor of economic sciences, the head of the Center for  Economic Research Ashot Tavadyan at the press conference.

According to him, in 2017, Armenia's exports for the first time  exceeded $ 2 billion, amounting to $ 2.2 billion. Thus, the growth in  exports increased by 25%. With membership in the EEA in Armenia,  exports have increased by about 50% over two years, which is the most  important factor for the country's competitiveness growth after the  country's accession to the structure. According to the expert, the  first priority is also the further diversification of exports. It is  necessary to use all the capabilities of the EAEC to achieve exports  of $ 3 billion.

Russia ranks first in terms of investment in Armenia. It should be  recognized, however, that due to sanctions and  uctuations in prices  for energy resources, there has not yet been a significant increase  in the rate of investment in the RA economy.

As Tavadyan noted, in the main exports to the markets of the EEA in  2017 grew due to the chemical industry and the pharmaceutical  industry (71.4%), wood products (50.5%), textiles and textiles (35%),  finished food products (27%). It should be noted that in 2017,  exports to Russia grew by 44.6%.  Meanwhile, as Tavadyan noted,  Armenia mainly exports raw materials to the European Union.

In 2017, the GDP growth in Armenia exceeded 5%, according to  preliminary estimates, making 5.4% against the background of the  forecasted figure of 3.2%.

According to him, an increase in the level of competitiveness of the  country was facilitated by: the signing of an agreement with the  Unified Energy System for the lifting of customs duties;  simplification of all procedures - from registration and obtaining of  export licenses to customs clearance; stabilization of the Russian  ruble exchange rate for 2016-2017. The ruble appreciated by 22.5%, so  the currency earnings of exporters to Russia increased accordingly;  reduction of gas prices. Armenia receives gas at a price of 150  dollars per 1000m3, despite the fact that the price for gas in the  region is 180-190 dollars. Considering that, Armenia consumes about 2  billion of gas a year (in 2017 - 1.996 billion m3, an increase of  7%), the effect is 70 million dollars. When signing the Treaty on the  EEA, the gas price was about 400 dollars per 1000m3, and for Armenia  the price fell from 270 to 189 dollars.

According to the expert, the decision of the Armenian government to  reduce the price of gas for greenhouse farms and processing industry  by one-third. Given that energy resources account for approximately  30% of the cost of production, the actual cost of agricultural  products has decreased by 10%, which of course also increased the  competitiveness of these products.

Export to the EU also increased, which is primarily due to a  significant increase in prices for non-ferrous metals. Exports of  non-ferrous metals, aluminum sheets, ferroalloys constitute the  absolute majority of our exports to the EU. The price of copper in  2016-2017 increased from 4400 to 7000 dollars per 1 ton.

Extraction of metallurgical ores in 2017g. increased by 13.2%. Export  of copper concentrate increased by 32%. According to the EU experts  on the GSP + system, Armenia saved $ 8.7 million in 2016. In export,  at the same time, exporters saved about $ 60 million, taking into  account preferential prices for energy resources.

Growth was also recorded in the tourism sector: in the nine months of  2017, Armenia was visited by 1,172 thousand tourists, which is 21%  more than in the same period of the previous year. The significant  growth of tourists, according to Tavadyan, is not only the result of  the membership of the EAEC, which really contributes to the free  movement of citizens of the member countries of the structure, but  also the decision of the Armenian government on the possibility to  visit Armenia from Russia by internal passports.

Transfers to the republic also increased, amounting to 1.489 million  dollars (an increase of 7%) instead of 1.382 million dollars in 2016.  Mainly Armenia receives transfers from Russia - 63%. Transfers from  the United States amounted to 14%, from Ukraine - 5.5%.

As Tavadyan stressed, it is necessary to use all the opportunities  created by the Treaty on the EAGE for the creation of joint ventures.  There are prospects for cooperation between the EEA countries in the  defense industry, engineering, electrical engineering and instrument  making, attracting investments in the production of building  materials and building copper smelters, in the chemical industry, in  light industry, in agriculture and food industry, in the production  of medicines, and in the development of tourism.