Aram Safaryan: Armenia`s positive economic performance in 2017 is largely due to its membership in the Unified Energy System 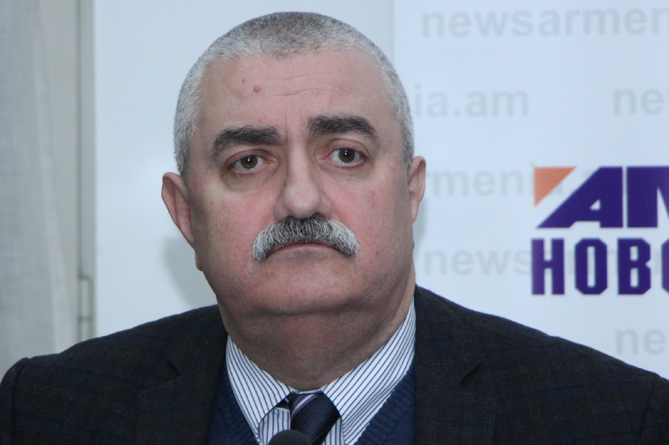 ArmInfo. The positive  economic indicators of Armenia, registered in 2017, are largely due  to the membership of the republic in the Eurasian Economic Union.

This opinion was expressed today at the press conference by the  coordinator of the Eurasian expert club and the head of the  organization "Integration and Development" Aram Safaryan.

At the same time, he noted that, on the whole, the year was  economically favorable for the whole EEA space, but the most  impressive indicators were recorded by Armenia. Analysis of the  current situation, according to Safaryan, shows that economic growth  trends will continue this year. The expert stressed that the most  encouraging is that Armenia has significantly improved its export  performance in terms of some goods and finished products. First of  all - this wine (the republic in 2017 exported 1.2 million liters of  wine). "If this pace continues, the export of wine after the export  of cognac will be the second leading direction of Armenian exports,"  the expert said.

According to him, the republic has significantly improved its  performance in the direction of exports of textiles and footwear.  "This means that the quality of Armenian finished products has not  yet been forgotten in the EAEP space," Safaryan said. He said that  the Eurasian Economic Week will be held in Yerevan in mid-October,  which will also help to establish new business contacts and attract  investments.  Further, Safaryan presented the economic research data  of Doctor of Economic Sciences, member of the Eurasian expert club  Tatul Manaseryan. According to the document, the indicator of  economic activity in Armenia for 2017 compared to the same period in  2016 grew by 7.7%, which is the highest in the region.  The last  time, in general, the economic growth of the country at about 7% was  recorded in 2012.

At the same time, the volume of gross agricultural production,  compared to the same period of the previous year, declined by 3% to  906.7 billion drams. However, the growth in exports of certain types  of agricultural products and manufacturing products has grown  significantly, especially in the EEA countries. Only in terms of wine  exports to Russia was recorded a record growth in recent years - more  than 80% (1 million liters) of Armenian wine exports accounted for  the Russian market, while exports to Russia increased by 68.1%. And  over the years of Armenia's membership in the EEA, the total volume  of exports to Russia has increased by more than 250%.

The most significant export items in the reporting period were  presented in the following commodity groups: -  about $ 692.2 million (an increase of 46.9%),

Meanwhile, as the expert notes, the Armenian government took a lot of  efforts to contain inflation growth rates. In January-December of  2017, inflation was registered in the republic at a rate of 1%. This  is the lowest rate of inflation in the region, while the situation  with inflation in the country is better than even in those countries  whose governments have a direct impact on prices.

According to the National Statistical Service, consumer prices in  Armenia in December 2017 to December 2016 (12-month inflation)  increased by 2.6%, for food products (including alcoholic beverages  and tobacco products) - by 5.3%, for non-food products - by 1.7%,  while for tariffs and services - decreased by 0.5%.